Developers who are looking for open parcels on Newbury Street are officially out of luck. In a filing with the Boston Planning and Development Authority on February 19, 2020, L3 Capital LLC outlined its plans for the final remaining open parcel on Newbury Street. The long-time location of a surface parking lot, the site sold to the Chicago- and NYC-based firm for a whopping $40 million in the summer of 2019. Shawmut Design and Construction of Boston has been contracted to do the work, and construction is expected to begin in the third quarter of 2020 and to wrap up by the end of 2021. 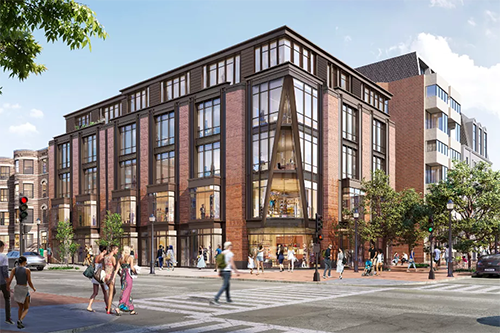 It’s truly the end of an era for this highly desirable section of Back Bay. The building that will be built on the parcel at 149-155 Newbury Street will be called The Aubrey – an homage to the fact that the Hotel Aubry apartments stood at the site for many years. Plans call for a five-story building that will stand about 65 feet tall. The first one to two levels will be devoted to retail space, and the rest will be devoted to office space – and you can expect for that to be Class A office space in high-end Back Bay.

The history behind the site is quite interesting, and it stretches all the way back to the start of the Back Bay neighborhood. The neighborhood, of course, was famously created after a landfill was made out of the former swampland that existed there. Shortly after that, in 1883, the Hotel Aubry apartment building was constructed. In 1908, Aroline Pinkham Grove, a resident of Salem, MA, and heiress to a patent medicine business fortune, acquired the land and the building – and it has remained in possession of the Gove family until just last summer.

However, the Hotel Aubry apartments didn’t make it quite as long. In 1958, the Gove Family demolished the old brick and stone building, turning the lot into a surface parking lot made out of asphalt. Stretching over just under one-third of an acre – the parcel is reportedly 14,504 square feet in size total – the lot undoubtedly served the Gove family well for many years thereafter. That’s especially true as the reputation of Back Bay’s elite shopping district gained more and more momentum, increasing demand for parking in the area.

Last summer, the Gove family finally decided to cash in on the lot. When it went up for sale, several bidders swooped in with hopes of acquiring the last available developable parcel on Newbury Street. Ultimately, L3 Capital LLC came out on top, acquiring the land for an incredible $40 million. That equals out to about $120 million per acre, a sum that far exceeds even several other major deals of the same kind that have occurred lately. Given the fact that the lot was promoted as being the last available for development in the Back Bay shopping corridor, it makes sense that it went for such a steep price.

Situated at Newbury Street and Dartmouth Street, the new building will offer close proximity to the Newbury Street and Back Bay MBTA stations. CBT Architects has presented its plans to the Back Bay Architectural Commission, and they are now in subcommittee. Because the lot is under 50,000 square feet in size, developers do not need to get approval from the Boston Civic Design Commission. Located as it is in the Back Bay Architectural District and the Back Bay Historic District, however, it’s safe to say that developers will have a few more hoops to jump through before everything falls into place.