Co-living, an emerging trend in real estate, is about to hit Boston in a big way. With 7Ink – the last phase of the South End’s Ink Block development – currently under construction, the city is about to discover what the co-living trend is all about. Expected to open sometime in 2021, 7Ink will be situated at Albany Street and Herald Street in South End. The project has been approved by the Boston Planning and Development Agency, so you can expect for leasing to begin in the not-too-distant future. 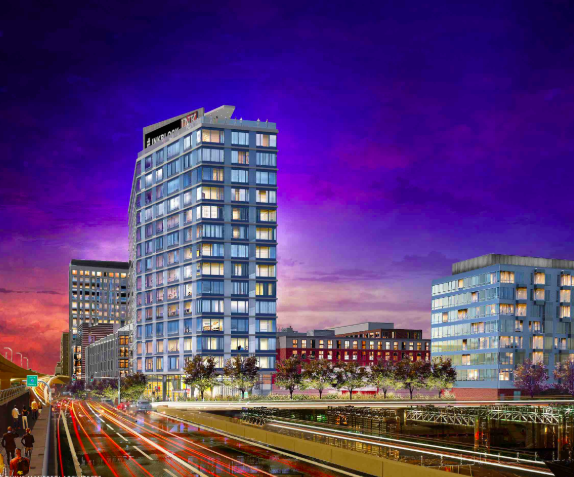 The new 14-story co-living development will feature 180 shared suites and micro-studios. The shared suites will consist of two-to-four-bedroom co-living apartments; residents will each have their own bedroom, but they will share the kitchen, living area and bathrooms with others. The micro-studios will mostly have en-suite bathrooms, but an option for sharing bathroom space with others will also be available. First proposed in 2017, 7Ink is being geared toward millennials who have been flocking to the city for its prime tech and life sciences jobs. In particular, the development will cater to young professionals who earn between $50,000 and $90,000 per year – people who can’t afford Boston’s prevailing rental rate, which exceeds $3,000 per month.

7Ink will also appeal to millennials who are at more transient points in their lives. Rather than having to invest in co-housing, which is designed to be a long-term commitment, young professionals can opt to sign one-year leases for shared suites or micro studios in the development. In doing so, they are expected to save anywhere from $200 to $300 per month versus what they would pay for similar properties in other Ink Block developments. They can also instantly tap into a ready-made community, which can help to assuage the social isolation that so many experience in today’s competitive world.

The project is a joint effort between National Development of Newton and New York-based Ollie, a big name in the world of co-living and micro-housing development. The micro studios will offer less than 400 square feet of space. Like the shared suites, or co-living apartments, the studios will be fully furnished – everything from furniture to dishware to toiletries will be included. Developers have also stated that 13 percent of the units will be earmarked for affordable housing – an important factor in a city where affordable housing is practically unheard of.

In addition to enjoying lower rent and fully furnished apartments, residents of 7Ink will have access to a vast array of amenities and huge amounts of amenity space. A communal kitchen will provide an area for residents to interact and socialize, and a rooftop deck will offer amazing views of the city and surrounding areas. There will be an on-site hospitality manager, and curated social events will be held throughout the year. Residents can also avail themselves of amenity spaces at Ollie properties in New York City and Pittsburgh, and Wi-Fi and cable TV will be included with the rent as well.

According to reports, the number of unrelated households in the U.S. – those that include at least one non-family roommate – increased by 55.4 percent between 2007 and 2018. As housing affordability continues to cause major problems in Boston, it’s no surprise that co-living is finding a foothold in the city. The trend also helps to curb the social isolation that is experienced by many young, urban professionals – and it accommodates their often-transient lifestyles by providing everything that they need in the price of the rent. Boston City Properties will keep you updated about 7Ink and other co-living developments, so check back often.