With the approval by the Boston Civic Design Commission of the master plan for a new development that is being planned for the former Suffolk Downs site, the project is just a short step away from being fully approved and ready for business. The 161-acre site, which spans parts of East Boston and Revere, was acquired by HYM Investment Group – the developer behind the project – in 2017 for $155 million. Even before then, much speculation was made regarding what would happen to the former racetrack site – including the possibility of it serving as a second headquarters for Amazon. 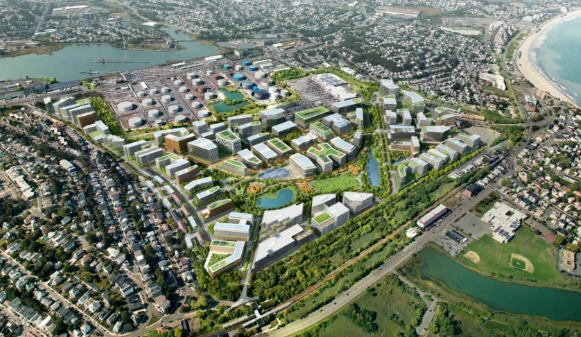 As part of receiving approval for the design plan for the site, HYM voluntarily made 16 trips over the last two years to the architectural review board. With that approval officially in place, the developer now waits to receive the seal of approval from the Boston Planning and Development Agency, or BPDA. It is hoping for this to happen by the end of the year. Whether it does or is postponed into 2020, we can expect to see the commencement of construction and other work at the site within the next handful of months.

To say that the plans for the former Suffolk Downs site are ambitious would be an understatement. According to the master plan, the 161-acre site will include 10.5 million square feet of space, including 50,000 square feet of indoor civic space; 40 acres of open outdoor space; and 450,000 square feet of street-front retail space. In addition, the site will include 10,000 units of housing. It is unclear at this point whether the housing will consist of apartments, condos or some combination of the two. One thing is sure, though: The affordability of these units has been and continues to be a point of contention.

From the start, HYM Investment Group planned for 930 of the 1,000 housing units to be affordable to people who make 70 percent of the area median income, or AMI. For a family of four in the year 2019, the AMI is $113,300; therefore, such units will have to be affordable for a family of four that earns around $79,310 per year. This should help to bring the rent payments to a reasonable level for those who fall into that bracket, and the fact that there will be more than 900 of them is significant.

The developer also plans to include another 500 off-site housing units in the development. Presumably, these will be offered at market rate, which means that out of all of the housing units that will be developed at Suffolk Downs, around 20 percent of them will be earmarked as affordable housing. Not surprisingly, this has been a point of contention during negotiations regarding the development. Boston City Councilor Lydia Edwards, who serves East Boston, has gone on the record as requesting a stronger affordable housing component to the plans. She cites the fact that the median income of East Boston is just 50 percent of the area AMI. Furthermore, renters and people of color throughout the city earn just 30 to 40 percent of the area AMI. The councilor wants the developer to work with the city to provide units around the 30 to 50 percent AMI level.

Regardless of how it all pans out, the development will include among the largest concentrations of affordable housing in one place in the city. With a single unit costing HYM between $500,000 to $550,000, however, it is unclear just how many affordable units will ultimately be included. Stay tuned to Boston City Properties for ongoing information regarding the Suffolk Downs project.