Construction of Long-Anticipated South Station Skyscraper to Start This Month

After nearly two decades of on-again, off-again planning, construction of a new skyscraper that will sit atop South Station – the busiest rail hub in the city of Boston – is poised to begin this month. In late December, Hines, the lead developer of the project, closed on a $870-million construction loan from CIFF Investments, LLP, a British hedge fund. Per documents that were recently filed in Suffolk County, the loan will finance a three-phase project that will ultimately include 2.5-million square feet of office space and condos – along with a hotel that will sit atop the station’s bus terminal and railbed. 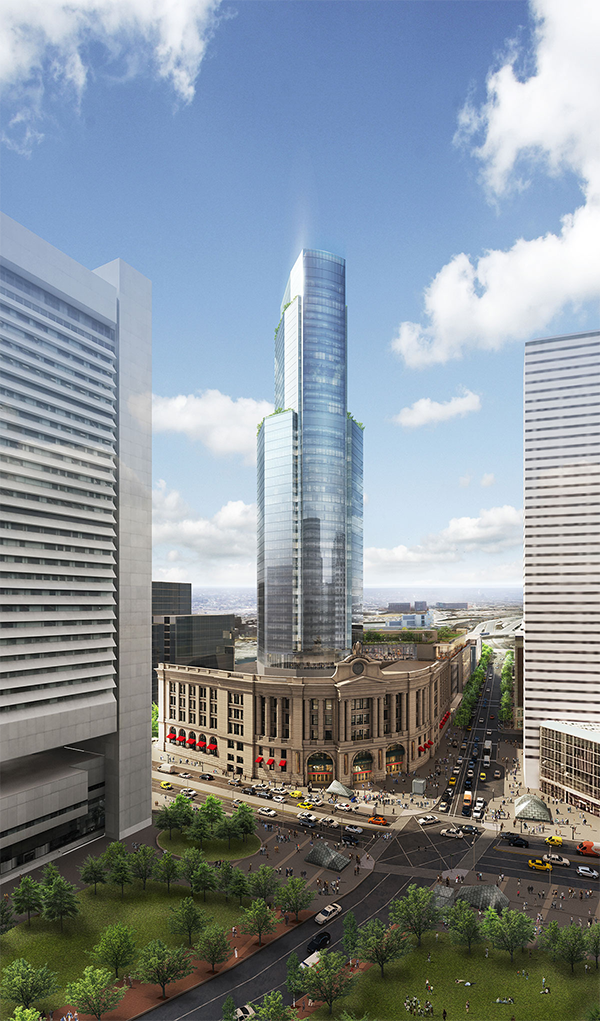 Completion of the first phase alone – the construction of a 51-story, 678-foot tower that will include 768,000 square feet of office space with condos overhead – is expected to take four years. Naturally, concerns have been raised about the impact that such a long, complicated construction project will have on South Station and Boston’s rail system, but developers have been working with stakeholders to mitigate any issues that may arise. The Massachusetts Department of Transportation has been working with Hines, the developer, to determine how to best phase in construction. A firm plan is expected to be filed imminently.

According to the developer, construction for the first phase will start at the far end of the station’s platforms. Therefore, it is expected to have little or no impact on train operations. Future phases of the project will likely result in changes to pedestrian paths of travel, but those changes will be announced to the public well before they are put into place, allowing people to plan accordingly. Fortunately, train schedules will not be impacted by any of this work, so residents shouldn’t have to worry about how they will get around.

The tower that will be built during the first phase of the project will take four years to complete, but the manner in which it is being built is designed to keep disruptions to a minimum. That’s because the skyscraper will rise up from a podium that will be built above the passenger platform; a series of archways will tie into a foundation that was constructed during the 1980s.

Incredibly, the project that is finally going to be underway is 20 years in the making. It was first conceived by the development arm of Tufts University during the 1990s. Hines, the Houston-based lead developer, has been at the helm of the project since that time. However, other aspects of the project have evolved through the years. Key city approvals were given in 2006, for example, but plans stalled out due to the recession of the late 2000s. Thanks to the backing of Gemdale Properties, a Chinese investor, the project was revived in 2016. Gemdale sold its interest two years later to two investment firms – Holland-based APG Asset Management and New York-based private investment firm Dune Real Estate Partners.

Investors closed on a deal to buy the 8-acre site for the project from the Boston Planning and Development Agency for $33.5 million, paving the way for the escalation of the project. The skyscraper will feature 768,000 square feet of office space, and condos – likely luxury ones – will be located above it. Later phases of the project call for the construction of a 349-foot hotel or residential building and for the development of a 279-foot office building, which will be situated above the South Station bus terminal.

Interestingly enough, construction will begin on the first phase – the 678-foot skyscraper with offices and condos – before any tenants are lined up. A rare situation in the world of Boston commercial real estate development, this is happening because of the four-year timeline of the project, which makes it unfeasible for developers to seek out tenants just yet. Still, if you would like to acquire commercial real estate at the new development, or if you are interested in buying or renting a condo in the new skyscraper, it is important to start planning as soon as possible. Boston City Properties can assist you significantly in this regard, providing you with the resources and real estate professionals that you will need. Contact us today for more information.