As early as next week, a massive office building complex at Government Center in downtown Boston is expected to hit the market. Center Plaza, long the home of the New England headquarters of the FBI, will surely attract a lot of attention in Boston’s white-hot commercial real estate market, in which lease prices have been soaring ever higher over the last handful of years. Purchased by Boston-based Synergy Investments and investment firm BentallGreenOak in 2017 for $365 million, the complex is expected to fetch upwards of $550 million upon being sold. 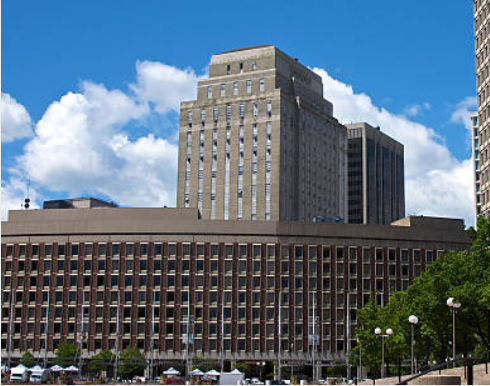 Featuring three interconnected buildings, Center Plaza served as the headquarters of the New England FBI from the time that it was constructed until 2016, when the agency packed up its operations and moved elsewhere. At the time that it was sold to the investment partners, the complex was about 60 percent leased. The two firms then spent approximately $30 million to renovate its common spaces and amenities. In particular, a flashy new fitness center – replete with golf simulators, Peloton bikes and arcade games – was added to the premises. Without question, this upgrade will allow the investors to make an even tidier profit when its sale is complete.

Center Plaza is located within close proximity of Faneuil Hall. More significantly, it is right across the street from the Government Center MBTA station. It is currently about 90 percent leased, and recent additions have veered more toward the tech side of things. Tenants including Spotify, Twitter and Grubhub have helped to make that possible, and the development is in line with a trend that has emerged all across Boston. Indeed, approximately 80 percent of office and lab leases of 100,000 square feet or more over the last two years have been located within a five-minute walk of an MBTA station.

In the space of just a few years, the current owners of the building stand to make a significant profit upon the sale of Center Plaza. The projected $550 million or more that the sale is expected to bring in is largely based on current Boston office space and commercial real estate trends. For example, the vacancy rate in the city’s urban core fell to 7.1 percent at the end of 2019 – the lowest figure that has been seen during this cycle.

Rent prices for premium office space in downtown Boston have increased by 33 percent since 2014. In 2019 alone, lease prices rose by 6 percent. Currently, the going rate for office space leases in downtown Boston exceeds $70 per square foot. With only around 10 percent of the space at Center Plaza currently available, competition for acquiring the complex is certain to be fierce. In fact, the likelihood of strong competition is probably what has prompted its owners to give a head’s up a few weeks before formally listing the property for sale. The buzz that has been generated already suggests that many investors are already eyeing the complex – so it is sure to be sold quickly.

Given that it was renovated significantly within the last few years, its immediate proximity to a major MBTA station and the overall strength of Boston’s office space market, the sale of Center Plaza is bound to make a huge splash and is likely to be among the top commercial real estate deals of 2020. Of course, the year is still young – and the market’s growth seems to know no bounds. In 2019, in fact, the city’s commercial real estate market absorbed nearly 1.9 million square feet of office space, which is what prompted –and continues to prompt – the ongoing escalation of office lease prices.

What does the upcoming sale of Center Plaza mean for you? If you own a tech-based company and are looking for office space in a prime downtown location, you should keep an eye on developments concerning this complex. With around 740,000 square feet of prime office space and an array of exceptional amenities, it is easy to see why the complex hasn’t struggled to keep vacancy rates low. Although only a tenth of the space is currently available, there’s no telling what the future will hold. With that in mind, stay in touch with Boston City Properties for future developments – and contact us today for more information.