The Seaport District is about to become home to the city’s largest new hotel since the mid-1980s. The Omni Boston Hotel, which is scheduled to open in June 2021, will boast 1,054 rooms – including 52 suites – which means that it will be the fourth-largest hotel in the city upon completion. The last time that such a large hotel was constructed occurred in 1984, which is when the 1,144-room Boston Marriott Copley Place opened. Located at 450 Summer Street, which is right across the street from the Boston Convention and Exhibition Center, the under-construction Seaport hotel won’t just cater to business travelers. With its prime location, it also hopes to attract lots of locals and tourists too. 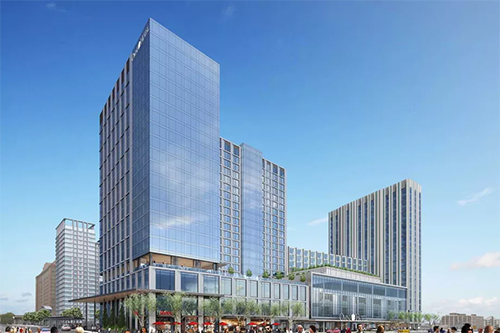 The development of the new hotel began in 2017, when the Massachusetts Port Authority designated a development team that included Omni Hotels and Resorts. This team went to work on plans for developing two acres of land that were owned by MassPort, and the idea for the Omni Boston Hotel at the Seaport was born. Groundbreaking occurred on May 22, 2018, and construction has unfolded fairly smoothly since then. Besides an issue regarding the proposed name of the hotel, which involved using the word “Seaport,” everything has fallen into place well for developers.

The new hotel comes at an opportune time. Governor Charlie Barker has expressed interest in expanding the Boston Convention and Exhibition Center before closing and selling the Hynes Convention Center, which is also controlled by the state. The proposed expansion would include the transfer of 12 adjacent parcels of land to the city, which would then be redeveloped at a later time. The area has experienced many major developments lately, including the construction of a 17-story office building by Amazon at 111 Harbor Way, which is expected to open in 2021 and will house more than 2,000 employees.

This is also a great time for the hotel business in Boston, so the new Omni Boston Hotel should enjoy a lot of fanfare upon opening. According to a report that was released in January, the Boston area’s average daily room rate and revenue per available hotel room is expected to increase through the end of the year. On top of that, occupancy rates in the hotel market continue to be excellent and are expected to remain above 65.5 percent through 2021, which is when the new hotel opens. What’s more is that the occupancy rate for Boston proper is even higher – it’s remained above 80 percent for many years running.

The new hotel will stand 21 stories tall, and an underground pedestrian tunnel will connect it to the convention center across the street. It is slated to include a vast array of amenities, including multiple bars and restaurants; 100,000 square feet of event and meeting space; and an elevated lounge in the lobby that will host performances by local musicians. The hotel will also include the city’s largest ballroom, which will clock in at 26,000 square feet. Another ballroom on the premises will offer 16,000 square feet of space. There will be a pool deck, a spa and a fitness center along with many other features.

The construction of the new Omni Boston Hotel is great news not just for the Seaport but for the entire Boston region. It is generating 1,100 construction jobs, and it will add 700 to 1,000 permanent jobs upon opening. It could also play a pivotal role in the proposed expansion of the convention center across the street, and that move could precipitate the closing of the Hynes Convention Center in Back Bay. Stay tuned to Boston City Properties for future developments regarding this new hotel.