Demolition of the former Boston Flower Exchange site has begun, officially marking the South End’s quest to join the ranks of Boston’s rapidly growing number of life science-technology hubs. The work, which began on December 12, 2019, will pave the way for the development of what is being called Exchange South End. As noted by the developer, The Abbey Group, where the former flower market revolved around the exchange of flowers for currency, the new one will revolve around the exchange of technology, ideas and culture – and it will bring up to 7,000 new jobs to the area. 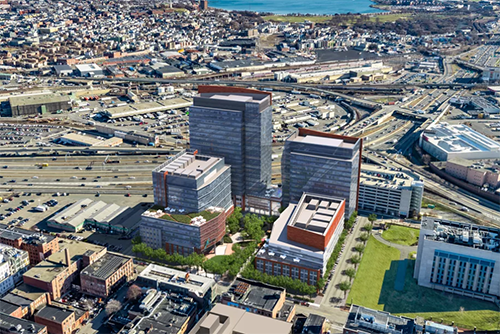 Photo Courtesy of The Abbey Group

Upon completion, Exchange South End will be a vibrant, 1.6-million-square-foot technology and life science campus. Offices and labs will fill the space, which will extend across four buildings. One of those buildings will be among the tallest in the South End, changing the neighborhood’s skyline in a big way. The development is expected to be delivered during the first quarter of 2022, so you can expect for construction to occur at a whirlwind pace. Ultimately, Exchange South End is expected to consist of the following:

Buildings A and B are to be part of the first phase of construction. With 14 additional surface parking spaces, Exchange South End will boast a total of 1,159 parking spaces.

Occupying a 5.6-acre parcel at the corner of Albany and East Canton Streets, Exchange South End expects to draw in tenants for a number of reasons. First, unlike similar developments at Kendall Square and the Seaport, it will be located in an area that already has a significant and established residential population. Situated close to the intersection of I-90 and I-93 and within close proximity of Boston Medical Center and Boston University School of Medicine, which are right down the street, it offers a convenient location that is also near numerous retail establishments and restaurants. Although the South End is known more for its huge expanses of Victorian rowhouses rather than commercial activity, developers believe that the $1 billion development will change that.

Located as it will be in one of the city’s fastest growing neighborhoods, Exchange South End is sure to transform the South End in many significant ways. In particular, it’s expected to bring at least 7,000 new jobs to the area. This is likely to create a domino effect that will include increased demand for residential housing in the area. Therefore, you can expect to see the development of new residential towers in the neighborhood before too long. Boston City Properties will continue to update you regarding the progress of the new Exchange South End, so stay tuned for more information.