Amidst a veritable avalanche of development activity in a formerly quiet section of Brighton, a new project that would bring 108 new apartments to the neighborhood has taken its first step toward becoming a reality. On January 9, 2020, initial plans were filed with the Boston Planning and Development Agency by Boston-based developer Ballas Group for the new apartment complex. This is just the latest in a huge wave of new construction that’s been transforming this section of Brighton since the arrival of the New Balance headquarters in the new Boston Landing mixed-use development. 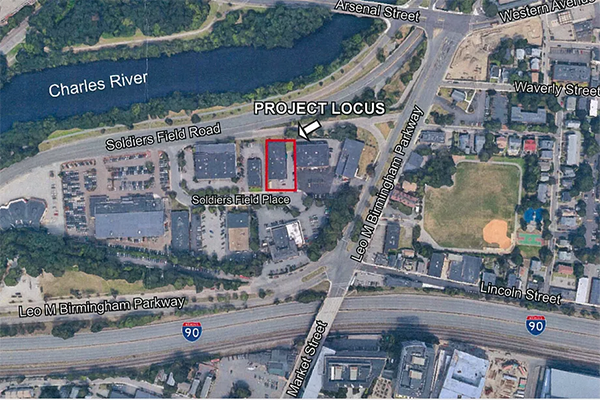 The plans that were filed with the BPDA call for the development of a six-story building that will include 106 apartments, with 14 of the units being designated as affordable housing. The new apartment building will replace a squat, nondescript office building that is currently located at the site at 1500 Soldiers Field Road, and it will include a parking garage with 60 parking spaces and ample bike storage. Additionally, plans call for “robust open space” along with new pedestrian and vehicular accessways and various other related site improvements.

The project is expected to take 18 months to complete – but the clock won’t start ticking until the necessary approvals are granted. Chances are that apartments in the building will lease out quickly thanks to its close proximity to the Boston Landing mixed-use development and the associated Boston Landing commuter rail stop that services it. Situated as it is across the Charles River from Watertown, the location is just one of many that has been or is being transformed in this section of Brighton. Recently, for instance, an office building at nearby 1550 Soldiers Field Road was torn down to make way for a new 211-unit apartment building. Not long before that, a new apartment building went up at the former site of the Black and Decker repair center.

Ballas Group’s new apartment building will be much smaller than other developments that have gone up in this section of Brighton lately. Less than two miles away, for instance, is Allston Yards. Approved by the BPDA on December 19, 2019, it is being built on the former site of the Stop & Shop supermarket and its surrounding parking lots. The 10.6-acre site is situated just off of Everett Street near the Mass Pike.

The new Allston Yards development is slated to include 806 condos and apartments. Nearly 150 of these units will be earmarked for income-restricted housing. The site will also include a full acre of privately-owned public parkland that will add much-needed green space to this section of Allston. Additionally, it will offer 117,000 square feet of retail and restaurant space, including a shiny new Stop & Shop; 350,000 square feet of office space; and 10,000 square feet of community art space. The timeline for the 1.2-million-square-foot project is up to 10 years, so it will be some time before those hundreds of housing units become available.

Another major development that is underway near the new Ballas-led project at 1500 Soldiers Field Road is the redevelopment of the WBZ-TV site. Located at 1170-1200 Soldiers Field Road, the property is currently the site of the TV station’s 62,000-square-foot studios and offices. The site also includes 133 parking spaces. National Development and Mount Vernon Co. have partnered to develop brand-new facilities for the station; specific plans for the 8-acre site are currently in the works. The current building will remain in use while the new facility is constructed. Once that’s done, the rest of the site could be opened up to new development.

As you can see, Brighton and neighboring Allston are both undergoing vast changes. With so much construction already completed, in the works and on the horizon, these neighborhoods will look completely different within the span of a few short years. Whether you are interested in buying or renting a place at Boston Landing, which is available now, or would like to rent an apartment at Allston Yards upon its completion, Boston City Properties is here to help. Stay tuned to our website for the latest news regarding these and other projects in these neighborhoods and throughout Greater Boston.