If you are a real estate investor looking for new areas to concentrate on in Greater Boston, you should set your sights on the North Shore city of Lynn. Located approximately 3.7 miles from Boston’s Suffolk Downs site, the city is poised to experience major expansions over the next several years. In addition to a complete transformation of its waterfront, the city may see a Blue Line extension soon – and its short-lived commuter ferry to Boston may be coming back too. 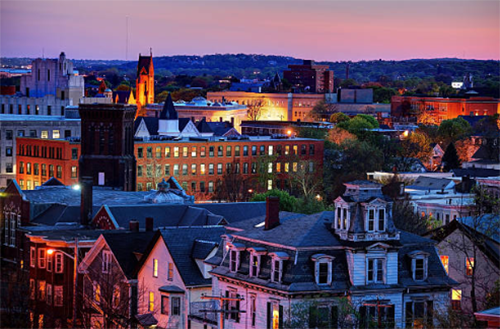 With many parts of Greater Boston becoming overly saturated and far too competitive for many real estate investors to gain a toehold, Lynn shows amazing promise for investors of all kinds. At the time of the 2010 U.S. Census, the city’s population stood at 90,329. According to estimates by the government, its population had blossomed to around 94,000 – an increase of 4.8 percent – by 2018. Today, its residential real estate market is on fire. The current median sale price of a home here, $394,000, represents an increase of 11.7 percent versus the previous year. In the current market, hot homes can go pending in as little as 18 days, and many sell for more than 3 percent above list price.

In updating its Waterfront Master Plan last summer, the city also paved the way for even more growth not just across its residential real estate market but across its commercial real estate sector too. Now that city officials are working on zoning changes along many sites on the Lynnway, several major projects are finally going to be coming into fruition. Some are already in the works while others are still many years out. Either way, this new development activity means big opportunities for savvy real estate investors.

Some of the projects to keep your eye on along the Lynnway include:

On top of all of the changes to the Lynnway, the city of Lynn is once again trying to see about an expansion of the Blue Line to its downtown train station. If it happens, the Blue Line would be extended 4.3 more miles from its current termination point at the Wonderland Station in Revere. Of course, this idea has been floated around for many decades now; it was originally dreamed up during the 1970s. However, with Suffolk Downs redevelopment on the horizon and other big projects coming up, the need for an extension is probably more severe than ever.

Finally, the Lynn Ferry, which operated on a trial basis for a few years starting in 2014, may be coming back in the near future. The necessary subsidies have not yet been secured from the state, but it appears likely that the ferry, which would operate out of the Blossom Street terminal, may become a reality again before too long. If that happens, it would once again ferry commuters from the Lynn waterfront to Boston’s Central Wharf. During its trail run, it operated only seasonally; if it comes back, it will likely be made available throughout the year.

What does this mean for real estate investors? Clearly, if you are one of them, you should start laying plans for investing in real estate in Lynn, MA, very soon. You can get all of the help that you need by connecting with Boston City Properties. We have residential and commercial real estate experts who can assist you in formulating an effective strategy. In the meantime, stay tuned to our site for ongoing updates regarding developments in this North Shore city.