With just a few approvals from the state and city still needed, the second phase of the massive Fenway Center air rights project could start breaking ground later this year. A collaboration between John Rosenthal’s Meredith Management Corp. and California-based Creative Science Properties, a biotech REIT and development firm that’s already raised $600 million of funding and aims to raise another $2 billion over the next several years, the second phase will lean much more heavily toward commercial real estate space than the first, which centered around residential space. 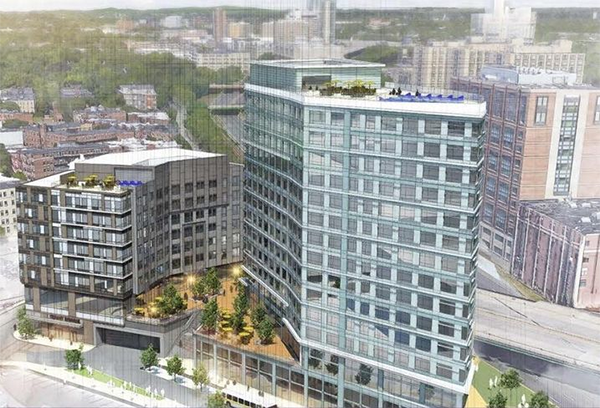 Upon completion, the second phase of the huge development, which will ultimately include five buildings, will feature 720,000 square feet of office and lab space and 600 parking spaces. It will span across two buildings; the first will stand 20 stories tall, and the second will stand 10 stories tall. Both of the buildings will sit atop a deck that will stretch across the Massachusetts Turnpike from Beacon Street to Brookline Avenue. They will be directly adjacent to the MBTA Commercial Rail Lansdowne station. Ultimately, a landscaped pedestrian walkway will be built over the station as well.

The air-rights deck that forms the base of the second phase of the project will be built at an estimated cost of $100 million. Of course, that’s just a fraction of the total estimated cost of the full development, which is expected to cost around $900 million. It’s also been a long time in the making. John Rosenthal, the CEO of Meredith Management Corp., started working on the project nearly 20 years ago. In the two decades since, he and his firm have worked on acquiring parcels, securing financing and fine-tuning and adjusting plans.

The new air rights deck will be by far the largest to be built over the Mass Pike since Copley Place, which was built in 1980. The second phase of the Fenway Center project has brought together some of the best minds in the life-science development sphere. Alan Gold, the executive chairman of Creative Science Properties and former CEO of BioMed Realty, co-founded the life-science real estate firm Alexandria Real Estate Equities. Along with BioMed, which was acquired by Blackstone in 2016, Alexandria is one of the two largest life-science developers and owners in the city of Boston.

Incredibly, the second phase of the Fenway Center project will be built on spec – that is, construction will begin before a single tenant has officially been lined up. However, Rosenthal has stated that his firm has been talking to prospective tenants for some time now, and the space is certain to be leased out quickly given its prime location and other advantages. Construction of the second phase could begin as early as this summer. However, it is currently undergoing the design-review process with the Boston Civic Design Commission, which started this week and has been referred to a subcommittee. Next, it will move to the board of the BPDA.

On top of that, MDOT must also sign off on certain aspects of the project before construction will begin. It is reviewing highway access agreements and lane closure agreements with developers, and it could take time for approvals to be granted. For the deck to be built, a portion of the Mass Pike has to be closed around the work zone. Developers for the second phase of the Fenway Center project are coordinating with Samuels and Associates, the lead developer behind an air rights project down the Pike and across from the MBTA Hynes Convention Center station.

Bower, the two-building apartment development that formed the basis of the first phase of the project, is expected to start leasing imminently. Thus, Fenway Center should start opening in the spring. The apartment development will include 312 units; its address is 771 Beacon Street, which also includes 37,000 square feet of ground-floor retail; 200 underground parking spaces; a 12,000-square-foot deck and the aforementioned landscaped pedestrian walkway over the Lansdowne station. Rents for apartments at Bower are expected to range from $2,900 to $5,800 per month. Stay tuned to Boston City Properties for future updates regarding the massive Fenway Center project, and contact us for assistance with renting an apartment at Bower.