With its unique, cantilevered profile and exceptionally eco-friendly design, the new Center for Computing and Data Sciences building at Boston University is sure to attract more than just students, faculty and researchers. In early January, construction began on the tower, which will feature a unique architectural design that will make it resemble a stack of books. Its floors will be cantilevered, or built off-center of one another in various spans, to provide additional opportunities for the development of green roof spaces. At the same time, the design affords those inside the building with remarkable views of surrounding Kendall Square. 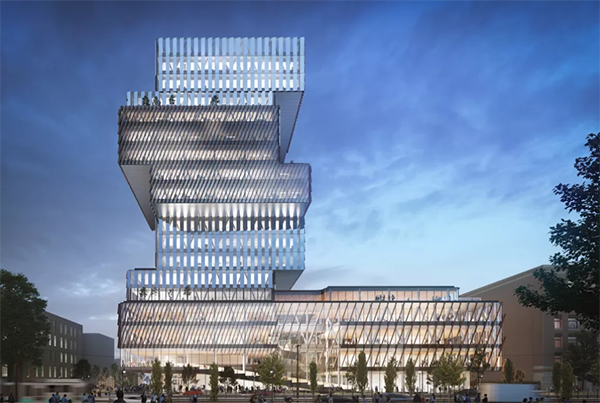 Located at 645-665 Commonwealth Avenue in Cambridge, Boston University’s first new major teaching center in more than 50 years will also be the tallest on its campus. Already, it is being said that people who traditionally head over to sites at MIT and Harvard to check out important architecture will start including stops to the new building as well. Construction is expected to be completed at a rapid clip, with the building expected to be completed by 2022.

Upon completion, the $288-million tower will be the largest carbon-neutral building in Boston since the enactment of the Boston Climate Action Plan Update in 2019. A wide array of green features are being included in its design. For example, the building will boast triple-glazed windows; advanced solar-shading devices; and geothermal energy production. Additionally, it will be built five feet above the city’s suggested level for sea rise – an important consideration in the world of climate change. Designed by KPMB Architects of Toronto, the 19-story tower is being constructed by Suffolk. The mayor and other dignitaries attended the official groundbreaking ceremony, and much has been made of its unique style and design in newspapers and architectural digests.

The ground floor of the new building, which will be almost entirely transparent, will sprawl across nearly the entire site. This will help to complete the streetscape along Commonwealth Avenue in Kendall Square, which also serves as the main artery through the Boston University campus. Unlike most of the buildings on campus, which are gray in color, the new tower will feature a terra-cotta-colored design that will help it to stand out and to have a more modern look.

All told, the new tower will offer around 350,000 square feet of space. For the first time in the history of BU, the departments of statistics, mathematics and computer science will be housed under one roof. This was done to promote the interdisciplinary approach to data science research that the university is committed to. With all of the departments located in one place, it is believed that they will be able to communicate better amongst one another. They can also share resources and information more readily, which should help to promote innovation and to propel research. The design of the building and the departments that will be housed within it all signal a strong emphasis on STEM research, which plays an integral role in learning and research institutions across Greater Boston.

Plans for the new tower were approved by the Boston Planning and Development Agency on July 19, 2019. Construction plans call for the development of a four-story podium atop a basement level; the remaining stories will stretch up from there. The building replaces a surface parking lot, joining projects across Greater Boston that have seen the rapid elimination of such lots across the area. It will be interesting to see how parking will be handled at the building, but underground parking is most likely.

The construction of the Center for Computing and Data Sciences at Boston University is just the latest in a series of exciting developments in Kendall Square, Cambridge and throughout Greater Boston. The interdisciplinary center will fit in nicely in a metro area that is increasingly earning a reputation as one of the largest tech-life science hubs in the entire world. If you are interested in acquiring space at or near the future tower or Kendall Square – or if you would like to buy or lease a home there – Boston City Properties can help. Contact us today for more information.