After nearly four decades, an air rights development is being built over the Massachusetts Turnpike – and a Cambridge-based company has officially signed a lease there, becoming its first anchor tenant. With CarGurus officially on board to occupy around 273,000 square feet at 1001 Boylston Street in Back Bay, construction on the new development is slated to begin on or around March 15, 2020. The company will vacate its current location in Cambridge and start leasing space for its new headquarters no later than March 21, 2022 – and it will be paying Back Bay level rent prices for the privilege. 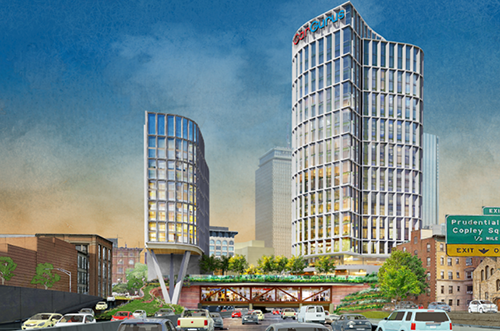 On December 19th, 2019, CarGurus signed a lease with Samuels and Associates for space at Parcel 12, which is better known now as 1001 Boylston Street. Upon completion, the project will result in a two-tower mixed-use development – and CarGurus will be the anchor tenant of the space. The company will occupy floors 10 through 20 in one of the two towers. Its headquarters there will also feature two rooftop decks and considerable amounts of amenity space. This is all according to information that has been filed with the Securities and Exchange Commission, or SEC, regarding the terms of the newly agreed upon lease.

There is little doubt that considerable negotiating occurred regarding the agreement for CarGurus’ tenancy at 1001 Boylston Street. According to the terms of the lease, the company will pay around $65 per square foot during its first year of occupancy. The rent will then increase by $1.30 per square foot on an annual basis until reaching a high of around $83 per square foot in the 15th year. In signing CarGurus as the anchor tenant of the new mixed-use development, the property owners are now able to proceed with actual construction plans.

On the face of things, it may appear that CarGurus managed to negotiate a sweetheart deal for the space, which is located in the highly desirable Back Bay neighborhood. After all, Class A office rents in the area average around $86 per square foot as of the fourth quarter of 2019. However, the online car-selling company signed a triple-net lease with the property owner, which means that it will be responsible for covering property taxes for the space that it will occupy. It will also be responsible for upkeep expenses for that space. By year 15, then, CarGurus will be forking over vast amounts of money for those 10 floors – but chances are that rent prices will be much higher by then too.

As part of the lease that was negotiated between CarGurus and the property owner, Samuels and Associates, the online firm will also receive a tenant improvement allowance of up to $130 per square foot. This means that the landlord has agreed to spend up to that amount to renovate and retrofit the space for CarGurus as the company sees fit. This aspect of the lease will help to balance out the effects of its triple-net terms.

The development at 1001 Boylston Street will be the first air rights development to be constructed over the Mass Pike since the Copley Place Mall, which was built during the 1980s. The lease that has been signed by CarGurus will begin 12 months after the development is delivered to the market, which is also to be no later than March 15, 2022. Construction on the two-tower development is slated to begin around March 15th of this year, so you can expect to see big changes in the area in no time.

Several other projects have been proposed for the space over the last handful of years. Some of them, including Fenway Center and Viola, which will be across from Parcel 12, are officially underway. Others have fallen through, however. Columbus Center, which was supposed to be situated between Back Bay and the South End, is no longer happening. These and other developments are certain to affect the commercial real estate market of Back Bay and surrounding areas, so stay tuned to Boston City Properties for updates as they occur.