By the time that it opens sometime in 2021, The Hub on Causeway’s office tower could be completely leased. In mid-January, the Boston Celtics and Boston Bruins signed leases for new office space at the under-construction tower at 100 Causeway, which makes up the third and final phase of the sprawling mixed-use development that has already transformed North Station and surrounding areas. According to reports, Banner Seventeen LLC leased 71,154 square feet of space in the tower – the entire 13th floor and part of the 12th floor. Meanwhile, Delaware North leased 34,068 square feet of space on the 14th floor. 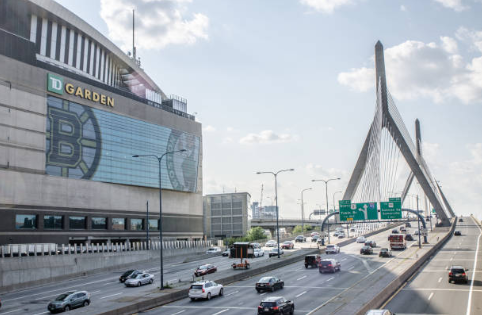 The 31-story building, the tallest office tower to be constructed in Boston in nearly 20 years, secured an anchor tenant some time ago. Verizon, which signed a 20-year lease last year, will occupy 17 stories of the building for a total of 440,000 square feet of space. All told, the building will offer 627,000 square feet of Class A office space. With the Celtics and Bruins having signed on for significant leases, it appears that commercial space in the development will be just as popular as residential space has proven to be.

All told, the Hub on Causeway offers more than 1.5 million square feet of mixed-use space. Located directly above the North Station stop, it seamlessly connects the West End to the East End and has transformed the entire look and feel of this part of the city. For many years, this section of the West End was made up mostly of industrial buildings and working-class areas. When development plans for the mixed-use complex first arose, local residents requested that a grocery store be included. They got their wish, with the 60,000-square-foot Star Market – the largest urban grocery store in the city – included in even the earliest plans.

The Hub on Causeway also includes a 272-room on-site hotel, CitizenM, and a wildly popular residential development called Hub50House. Situated in a 38-story building, Hub50House offers 440 luxury rental units that have been leased out with alarming speed. The premises includes a full three floors of amenity space, so it is easy to see why it has attracted so much interest. That space includes a rooftop swimming pool; a skyline deck with TVs and an outdoor kitchen; and a game room.

The leases that were signed by the Bruins and Celtics also align with the goals that developers established for the office tower phase of the development. While many office towers in other neighborhoods have effortlessly attracted TAMI tenants – tenants in technology, advertising, media and information – such space has been largely ignored by those tenants in the North End and West End. From its inception, however, Hub on Causeway sought to attract TAMI tenants, and that is evidenced by its chic and cutting-edge aesthetics. These include exposed steel and brick elements as well as factory-style windows.

With front-office operations for the two major Boston teams to relocate to 100 Causeway shortly after it opens, the building is sure to have no trouble filling the rest of its space. It is attractive to many types of tenants thanks to its open floorplate design and wraparound views of the city. Whether you are interested in leasing office space at the Hub on Causeway or would like to rent a luxury apartment there, you’ll need all of the help that you can get. Stay tuned to Boston City Properties for future updates regarding this property, and contact us today for help in leasing space there.