Big changes are in store for the waterfront of Lynn – and January 2020 marked the beginning of them. The announcement of the groundbreaking for Breakwater, a new apartment complex, developer Callahan Construction Managers is the first to take concrete steps to transform the city’s waterfront. 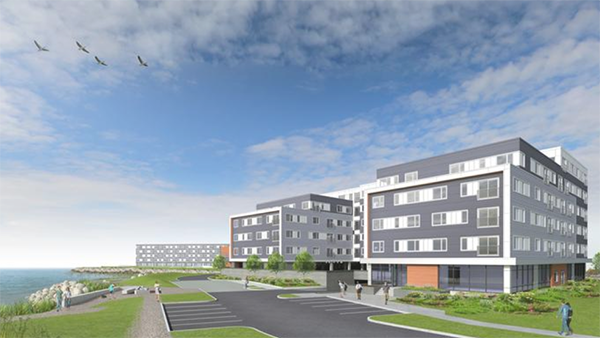 Previously home to the Beacon-Bel Chevrolet dealership, the 14-acre site upon which the new apartment development will sit has been vacant for more than 35 years. In collaboration with the state, the city of Lynn, Dolben and HDS Architecture – the designer of the complex – Callahan, Inc.’s project calls for the construction of two buildings that will sit on top of a parking garage. Plans for the development also include two courtyards; a pet-washing area; outdoor fire pits; and a fitness center.

The redevelopment of the site at 254 Lynnway, which is expected to cost around $90 million, also requires major improvements to the seawall along the property. For this to happen, the complex will avail itself of a $1-million infrastructure grant that will be provided by the Seaport Economic Council. Upon completion, the apartment development will offer 351 market-rate apartments. These units will overlook the Lynn Harbor. Construction is currently underway, and the complex is expected to be completed and ready for leasing activity by March 2022. From the sounds of it, the development will compete directly with high-end apartment developments that have cropped up across the city of Boston.

The Breakwater apartment development represents just one of many major changes that are expected to occur along the Lynn waterfront. Lynnway, the major thoroughfare that runs along the harbor in the city, will see several new developments in the years to come. Currently, five projects are in the works and are in various stages of planning. Last summer, the city updated its Waterfront Master Plan, paving the way for the development of thousands of new waterfront condos and apartments. The plan also makes room for new public access to the waterfront; mixed-use developments; retail development; and even a new hotel.

Other changes that are in the works for the Lynnway include: