A project that originated in 2016 received key approvals from the Boston Planning and Development Agency in its first meeting of 2020 – and the new decade. In mid-January, the BPDA approved plans for the proposed Washington Village mixed-use development in South Boston, which will include 656 residential units. At the same time, it approved a Notice of Project Change, or NPC, that was filed with the agency by developers in October 2019. The NPC revised plans for the first phase to include one building instead of the two – Building A and Building B – that were cited in the original plan. 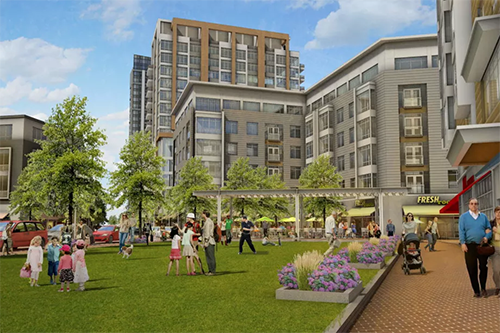 According to the NPC, the single building that will be constructed during the first phase of construction will include 214 rental units; 37 of them will be earmarked for affordable housing. The building is also slated to include 20,500 square feet of retail space and 58 parking spaces. During the same meeting, the BPDA approved five other projects, including one for a co-living development in Allston and another for Boylston Place, a 450-plus-unit development in Fenway. Approval for a 145-unit residential project at 282-308 Bremen Street in East Boston was also granted. The BPDA also scheduled public hearings for a number of projects, including Fenway Center; Suffolk Downs; and 290 Tremont Street.

The approval of the NPC for the Washington Village project means that the project is finally once again underway. It had been put on hold in December while pending review from the BPDA. The $400-million mixed-use development will be located between Dorchester and Old Colony Avenues in the heart of Southie. It will be in close proximity of the Andrew Square Red Line MBTA stop, which is sure to add to its appeal.

Ultimately, Washington Village aims to become an entirely new neighborhood in this section of South Boston, which has been made up of mostly vacant land and smatterings of old industrial buildings for several decades now. All told, eight buildings will be located on the five-acre site, which will stretch across six city blocks. Plans call for 2.4 acres of the land to be reserved for the “public realm.” This includes “The Green,” a 1.5-acre public plaza and green that will be situated at the center of the development. The NPC that was recently approved by the BPDA called for The Green to be moved to the west side of the project.

The eight buildings that make up Washington Village in Southie will include 656 residential units, including luxury apartments and condos. Therefore, you will be able to rent a place there or even buy a condo. These residences will include studio units along with one-, two- and three-bedroom homes. All told, the development is slated to include 98,000 square feet of retail space, including a grocery store anchor tenant, and parking for 560 vehicles. The project is expected to take five years to complete, so it will be some time before leasing or selling activities begin.

In addition to the 1.5-acre plaza, which will be made up mostly of green space, Washington Village will include buildings that will primarily stand anywhere from three to six stories tall. The two that will be closest to Dorchester Avenue, however, will extend anywhere from 18 to 22 stories. In the NPC that was approved by the BPDA a few weeks ago, plans were also revised to increase the interior height of the ground floor level of the first building to more easily accommodate retailers’ needs. In turn, the height of that building was increased by 15 feet.

By adding more than 650 new residential units to Southie, Washington Village is among many projects that are trying to make Mayor Walsh’s 2030 Housing Plan a reality. The plan calls for the addition of 53,000 residential units across the city over the next 15 years, so there is still a long way to go. Given how many approvals the BPDA has already granted already this year, it’s safe to say that 2020 will be another banner year for new development across the city. Check back with Boston City Properties for the latest updates regarding commercial real estate across Greater Boston.