Despite a rocky year precipitated by a global pandemic, Boston's Seaport District continues its spectacular growth. In early December, a developer submitted a letter of intent regarding a proposed addition to the building at 88 Black Falcon Avenue to the Boston Planning and Development Authority. The proposed plans call for nearly doubling the existing space at the site, adding more than 300,000 additional square feet of lab space to the city's hottest neighborhood – and it's just the latest of several new developments in the area. 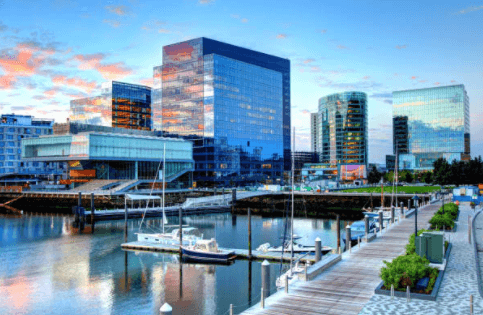 The letter of intent was filed with the BPDA by TDC Development Group LLC. The Davis Cos., a Boston-based development firm, will construct a four-story addition atop the existing building at 88 Black Falcon Ave., located at the far edge of the Seaport District. The current building, a three-story low-rise, offers 353,910 square feet of office, warehouse and R&D space. The proposed addition will add four more stories to the building, bringing its total square footage up to 684,910. The addition will primarily expand the building's lab space, but additional office space and warehouse space are likely to be included.

The property in question is positioned on a pier. The developer has stated that the site will also now include maritime, or water-dependent, uses with the new addition. However, specifics about these uses have not been made public. It is quite likely that a water taxi stop of some kind could be included at the site and that other additional access points for public transportation will be worked into the plan.

Currently, the Davis Cos. holds the ground lease for the property in question with the Massachusetts Port Authority. The company paid approximately $60 million for the ground-lease rights to the 10.5-acre site in 2017.

Thus far, only the letter of intent has been filed for the project. The BPDA has not weighed in on it yet, but it is expected that the plans will be approved fairly early in the new year. Therefore, no timeline regarding when construction will begin – and when it will be completed – is available at this time. Since the project entails constructing an addition to an existing building instead of having to build an entirely new one, however, odds are that the construction timeline should be reasonable.

Just a few years ago, this corner of the Seaport was just an afterthought for most developers. Now that development in the neighborhood has continued at such a brisk pace for such a long time, developers are searching further afield. This can only mean that before very long, open space in the district will be even more difficult to come by – and that could mean spikes in lease prices and property values in the not-too-distant future.

The property at 88 Black Falcon Ave. is just one of several in this part of the Seaport that is seeing new development. In early December, for example, the BPDA approved plans for a 10-story, 380,000-square-foot building on Harbor Street – just a stone's throw from the property that is being expanded. Demand for lab space and life-sciences space is still strong, and space is filling quickly. With a vaccine now available, the pandemic could finally start winding down in 2021 – and that can only mean more development and expansion for the Seaport District, so stay tuned to BCP Real Estate for future updates.