Given how hot real estate has been in Boston’s Back Bay over such a long period of time, it’s a bit surprising to learn that any vacant parcels are left. However, the last developable parcel in the neighborhood, located at 380 Stuart Street, appears to be spoken for at long last. After plans for a different office tower for the site fell through, another developer has purchased the parcel and plans to construct a 26-story office building on the site. 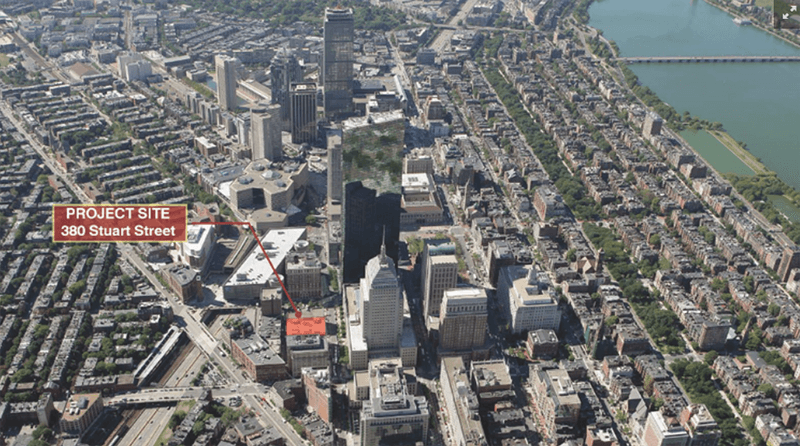 On December 4, 2020, Skanska, the multinational construction developer based in Sweden, announced its purchase of the parcel in question for $177 million from the John Hancock Life Insurance Co. Originally, John Hancock acquired the parcel with plans for developing a 26-story high-rise office building with a distinctive, curved design. The $350-million project never panned out, however, and John Hancock decided to sell.

What’s not clear is precisely why John Hancock opted not to develop a building on the site. However, it could have something to do with the ongoing effects of the COVID-19 pandemic on Boston’s office space market. At the end of the third quarter of 2020, more than 2.7 million square feet of office space was available across the city; during that quarter, nearly 1 million square feet of that space became available. Much of this has to do with restrictions that are still being imposed under Phase III of the city’s shutdown order, which dictates that office buildings may operate only at 40% occupancy.

Many employers have been surprised at the success of having employees work remotely. Some have even pushed back return dates until the middle or end of 2021, which could mean that available space will continue to linger for some time. With millions of additional square feet of new office space scheduled for delivery between 2021 and 2023, it is somewhat surprising to learn that a developer wants to build a huge office tower in Back Bay. However, once a complete recovery occurs – which may not happen until sometime in 2024 – demand for office space should skyrocket again, and the new space will ultimately be absorbed.

The sale of the property to Skanska reportedly included the permits for the building that was going to be built by John Hancock Life Insurance Co. However, renderings for Skanska’s proposed tower have not been made available yet, so it is unclear whether they will largely mirror those plans or not. Either way, the new tower will be one story taller than the one that was originally proposed for the site.

Besides offering 625,000 square feet of office space, the proposed tower will include ground-floor retail and below-ground parking. The developer will seek LEED Platinum certification. It will also have to take down a vacant 144,000-square-foot building on the site, which is just steps away from the neighborhood’s most famous building: the 62-story John Hancock skyscraper. The site is also just a few short blocks away from Newbury Street, the neighborhood’s main thoroughfare.

Although construction loans for new office space have been difficult to get for some time, Skanska is not affected since it typically funds its projects entirely from its own balance sheet. It is expected to do the same thing for the project at 380 Stuart Street, but specific information has not been released yet.

Since the developer hasn’t released any additional information, it is unclear when construction will begin on the new tower. Approval is still needed from the BPDA, and a lot of other red tape needs to be cleared. By the time the tower is completed, however, the city’s office space market should have fully recovered, so the tower is unlikely to stay vacant for very long.