Another major milestone in Amazon's ongoing expansion in Greater Boston has been reached with the topping off of a 17-story office building in the Seaport District on November 18. The building at 111 Harbor Way, also known as Block L4 of the company's 20-block Seaport project, is now ready for the next phase of development. It was designed by the architectural firm Gensler, developed by WS Development and is being built by Turner Construction. All told, Amazon will lease 430,000 square feet of the 525,000-square-foot building; two levels will be reserved for restaurant and retail space. 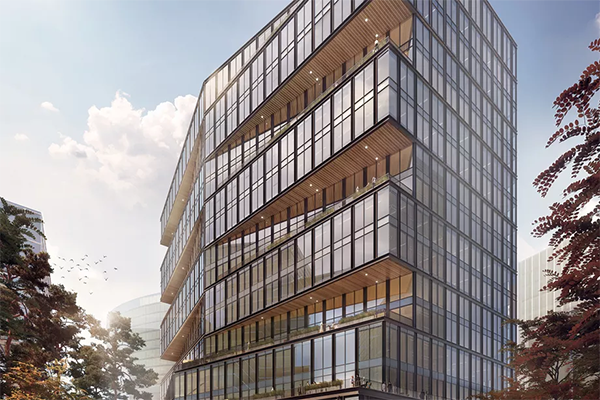 The building, which was announced in 2018, will bring 2,000 jobs to the city. Those jobs will be centered around machine learning, robotics engineering, speech science and cloud computing. Just as the building there was being topped off, another Amazon-related project went on the back burner. Two days before the milestone was reached at 111 Harbor Way, Joe Hanley, an attorney at McDermott, Quilty and Miller LLP – a firm that represents Amazon – asked the Boston Zoning Board of Appeal to withdraw "without prejudice" a proposal for a warehouse at 4 Alger Street, which is part of a 22-acre development known as "On the Dot."

The warehouse at 4 Alger Street was proposed by Core Investments, a Boston-based real estate development firm, to become the site of a new distribution center. Currently vacant, the site was once home to a distribution center for Blue Cross Blue Shield. Located close to the MBTA Andrew Station on the Red Line, the parcel in question had been zoned for residential development, which wouldn't work with the proposed plans from Core Investments.

In fact, in September, officials with the BPDA advised against the development of the proposed distribution center, recommending that the Zoning Board of Appeals deny the renovation "without prejudice," which means that the developer and Amazon could return with a different proposal within a year. On November 18, the Zoning Board of Appeals voted to deny the proposed plans. Now, the development team must wait a year before moving ahead with any other plans.

With the topping off of 111 Harbor Way, the next steps in the construction process can begin. Designed by Gensler, the building will ultimately have a timeless design that suits this section of Boston's industrial history. Outdoor terraces will open up alternating floors, and the Paseo, an interior, street-level public promenade with restaurants and shops, will connect to a public park. That park will later serve as the hub of Harbor Way, another promenade connecting Summer Street to the water.