The recent approval of the Winthrop Square Tower project by the Boston Planning and Development Agency is just the latest in more than two years of developments concerning the site. Original plans called for the tower to soar 775 feet into the sky, which would have easily made it the second-tallest building in New England. Even at its current, reduced height, the building will be among the 10 tallest buildings in the region. Even after the height of the building was reduced the first time, it still posed problems for many people. The third and latest version is shorter and blockier, but it appears to lay the most serious concerns to rest.

What was poised to become the second-tallest building in New England has lost some of its height once again. Earlier this month, developers of the Winthrop Square Tower project in Boston's Financial District received approval from the BPDA after revealing plans for a shorter tower. Upon completion, the latest version of the tower will stand just over 690 feet tall. Original plans called for it to be nearly 100 feet taller. After receiving push-back due to concerns about shadows and disruptions to airline traffic, however, developers pared the building down to its present proposed height. Will construction actually start soon? 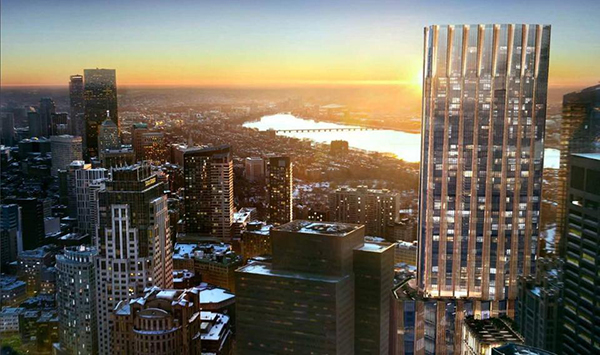 The proposed building is being constructed at 240 Devonshire Street, which is the former site of the Winthrop Square Garage. Given its prime location in the heart of the Financial District, it comes as no surprise that many developers vied for a chance to build something there. The property is owned by the City of Boston, and the developer is expected to pay around $166 million for it. However, the final price will depend on the size of the building--and that still remains to be seen, although it looks like we are getting closer to a definite plan.

One issue concerning the original proposed height of the tower involved the shadows that it would cast on the city below. Developers had to be mindful of a long-standing law that forbids the construction of buildings that would cast excessive shadows upon Boston Common and Boston Public Garden. Even after the height had been reduced the first time, studies showed that shadows would plague the Common for an unacceptable period of time each day. The FAA also chimed in with concerns over how the proposed tower would affect air traffic into and out of Logan International Airport.

The height of the building wasn't the only hiccup for developers of the project, which is expected to cost upwards of $1.3 billion when all is said and done. After the initial revision was made, concerns were raised about the new design of the building. The second design was deemed to be too plain; in addition to shaving off even more height, the latest version calls for a building that has two distinct parts. It is therefore more visually interesting and more acceptable for the area.

When the project is completed, Boston will have yet another soaring tower at its disposal. All told, the building will offer around 1.6 million square feet of space. It will include a mix of office space and luxury condos. Specific information regarding the condos has not been released yet, but you can expect that they will include upscale features and finishes--and they are sure to cost a pretty penny too. The building will also surely offer an array of exciting amenities and services. Boston City Properties will continue to track developments concerning this project, and we can help you to secure a condo in this building when the time comes.