A cherished Boston landmark is safe for at least the next several decades. A few weeks ago, developers filed detailed plans with the Boston Planning and Development Agency regarding a new project that would ultimately incorporate the famous Citgo sign, which has appeared in the background of televised Red Sox games for years, into the final design. When all is said and done, two new buildings that feature a mix of office and retail space will be constructed at Kenmore Square, and the iconic sign will be perched atop one of them. Read on to learn more about the project and the backstory behind one of the most famous signs in the country. 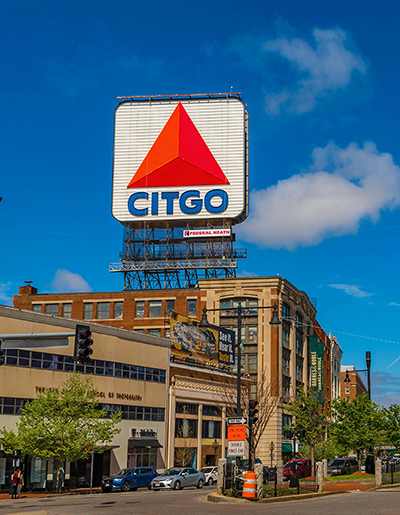 In the plans that were filed with the BPDA, developers revealed that the property at 660 Beacon Street, which they purchased along with eight other buildings in a $140-million deal in 2016, would incorporate the massive 60-foot-by-60-foot sign. The building that is currently located at that address will be adapted and reused to create the 140,000-square-foot Beacon Building. This building will include 110,000 square feet of office space, likely Class A, and another 18,000 square feet of retail space. With office vacancies at or near all-time lows throughout the city, the space is sure to be filled quickly.

The plans also call for the construction of a new eight-story building, which will be located at the corner of Commonwealth Avenue and Deerfield Street. This building will be called the Commonwealth Building, and it will offer more than 130,000 square feet of office space—again, likely Class A space—and another 10,000 square feet of retail space. In addition, there will be 60 underground parking spaces and rooftop terraces that are promised to offer phenomenal views of the Charles River and Kenmore Square.

A Brief History of Boston’s “See It Go” Sign

Out-of-towners may not realize it, but Boston’s landmarks aren’t limited to historic sites like the Paul Revere House and the Old North Church. For natives, the Citgo sign at Kenmore Square is every bit as significant. When the longtime owner of the site, Boston University, put the property on the market a few years ago, efforts to save the iconic sign were launched immediately. What is it about the sign that makes it so special to locals?

The Citgo sign made its original appearance in 1940. It was updated to reflect its current logo, which features the company’s famous tri-mark symbol and name in all-capital letters, in 1965. It earned its fame thanks to its prominence in backdrops of televised Boston Red Sox games at Fenway Park. The beloved sign has long appeared above the Green Monster. Through the years, it has earned its nickname, “the See It Go Sign,” for showing up in the backdrop of countless exhilarating home-runs. The sign originally had neon lights, but these were switched out in favor of LEDs in March 2005 as part of a six-month restoration. Every night, the sign switches off at midnight.

The development at Kenmore Square is a prime example of how historic landmarks and architecture can coexist along with new, thoroughly modern developments. It shows that there is no need to obliterate important parts of the city’s history to make way for the new. This is especially notable in a city where prime real estate is at a real premium. Although detailed plans have now been filed, no word has been released about when the new buildings will officially open—or even when space will become available for sale or lease. When the time comes, Boston City Properties has you covered with up-to-the-second information about vacancies here and in properties around the city.