Citing the challenges brought on by the coronavirus pandemic, a movie theater in the Seaport District has shuttered its doors for good. In a March 15th statement, Kerasotes ShowPlace Icon theater and WS Development, the landlord for the property, announced the permanent closure of the ShowPlace Icon movie theater located at 60 Seaport Boulevard. The theater has been a significant tenant of the development, One Seaport, since 2018, and it was the first ShowPlace theater to open in Massachusetts. Although the theater generated lots of buzz for its upscale movie-going experience, state-mandated shutdown orders and other effects of the pandemic caused severe economic damage. 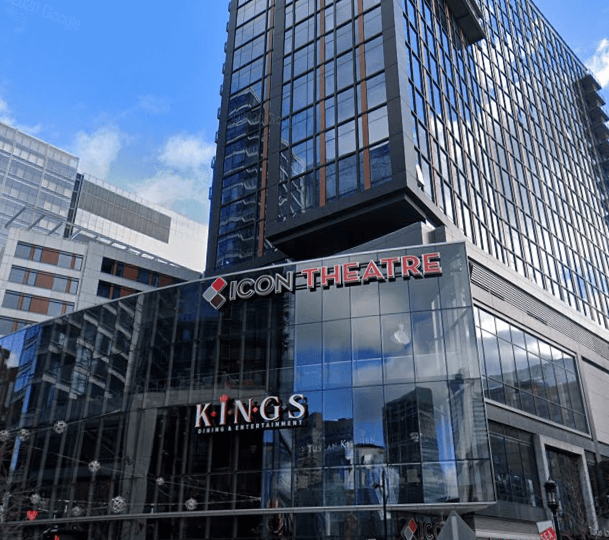 When it opened in 2018, the ShowPlace Icon theater at One Seaport got a lot of attention. Spanning 44,000 square feet, the property includes 10 auditoriums with 131 seats. It catered to an older, more well-to-do crowd with its full-service restaurant and bar, adults-only screenings and upscale concessions. In the past, the location offered special gourmet popcorn flavors developed by famous local chefs.

Like all movie theaters in the state, the ShowPlace was closed early in 2020 as the pandemic ramped up and lockdown orders went into effect. While many other theaters in the area came up with creative ways to stay afloat during those long months, the ShowPlace doesn't appear to have done likewise. Part of the problem is its very location. One Seaport and the surrounding area, usually bustling with workers and others, has been a ghost town since the start of the pandemic. Last summer, the theater briefly reopened when restrictions were temporarily loosened. During that brief window, the theater hosted screenings for the Boston Film Festival.

Movie theaters were given the go-ahead to open at 40% capacity in February – with a maximum of 50 people total – but it appears to have been too little, too late for the ShowPlace. Only a month later, the theater is closed for good, which could raise concerns about the fate of other theaters across Greater Boston. Although the ShowPlace Icon's closure is discouraging for the Seaport and the city, many other theaters in the area have been weathering the storm through a variety of creative measures. Smaller, mom-and-pop theaters seem to be exceptionally well-positioned to make it through the pandemic intact, but several larger chains are managing to get by. AMC, for example, was about to file for bankruptcy before raising $917 million.

Across Greater Boston, many theaters – especially small, art-house theaters – have gone to great lengths to keep customers engaged while their doors have been closed. Old-style cinemas like the Brattle Theatre and Coolidge Corner Theatre, for example, went virtual shortly after the pandemic struck. The theaters sold tickets for virtual showings of old films, pocketing part of the proceeds. The Coolidge has held an ongoing series of online film discussions, seminars and other events to keep moviegoers engaged and interested until theaters can open at full capacity again.

Many other theaters in the area have been managing to scrape by through various assistance programs. The Somerville and Capitol Theatres, for example, used PPP loans to retain several salaried workers. The latter sold ice cream last summer – more to keep people aware of the place than to generate serious money. Many theaters have been selling memberships and gift cards to keep money flowing in. Many have been collecting donations from Bostonians who are happy to help keep them afloat until the pandemic is over. With vaccines well underway, it shouldn't be long before Boston's movie theaters open again – despite a few theatres shuttering from the pandemic.