An affiliate of Quincy-based FoxRock Properties is proposing a large-scale mixed-use project just south of the MBTA Quincy Center Red Line station. At the Quincy Planning Board’s September 8th meeting, FRP Quincy Development LLC pitched a proposal that would include the construction of a 20-story tower and a 490-space parking garage. 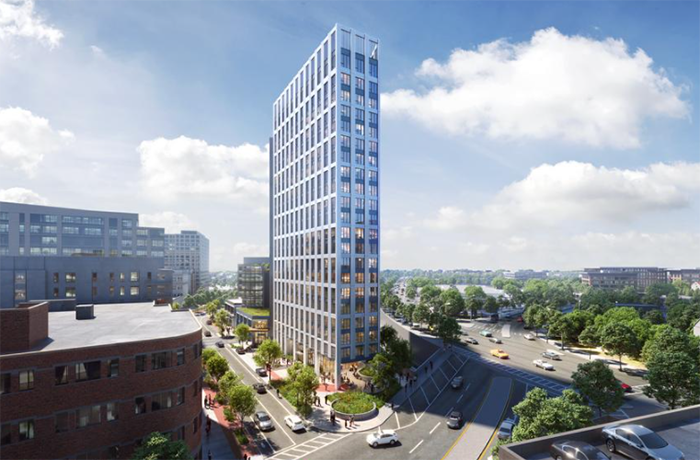 The project, dubbed SwitchPoint Quincy, requires two different approvals from the board. The first is a certificate of consistency covering the project as a whole; the second is a special permit to develop a 20-story-tall structure on the site. The parcel, roughly triangular in shape, is bounded by the MBTA tracks to the west, General McConville Way to the east, Granite Street to the north and General Dunford Drive to the south. It consists of approximately 117,000 square feet of land located within Quincy Center Zoning District 15, which allows 15-story buildings by right and 20-story buildings by special permit.

In June 2019, the Quincy City Council approved a land disposition agreement negotiated between Mayor Thomas Koch and FoxRock. The LDA allowed FoxRock to acquire a portion of the Ross Lot from the city for redevelopment purposes. It will also allow the firm to buy out the city’s right of reverter at 114 Whitewall Street, the former Quincy Medical Center site, for residential redevelopment. Under the terms of the LDA, FoxRock will pay the city $4.25 million.

The proposal presented to the Quincy Planning Board includes constructing a new office building on the south end of the parcel that will include 150,000 square feet of space. At the north end of the site, FoxRock wants to build a 20-story tower, which will include 125 hotel rooms and 200 apartments, with separate entrances for the hotel and residential portions. The parking garage will be situated between the two structures. The proposal describes the result as a “modern, mixed-use campus.” Both structures will include ground-floor retail, creating around 17,000 square feet of retail space to the site.

SwitchPoint Quincy will be developed on parking lots located at 37R and 86 Parkingway, across the street from Stop and Shop’s corporate headquarters. The developers want to begin construction sometime in the spring of 2022, and the project is slated for completion sometime in early 2024.

The Quincy Planning Board did not vote on the proposal at the last meeting but will pick up discussions again regarding it at its next meeting on November 10th.