The Seaport District will boast its very own European-inspired outdoor retail space near the waterfront by next summer. Boston-based WS Development, currently in the midst of its massive, 33-acre Seaport Square project, recently announced plans for what it has dubbed The Superette. Envisioned as a combination of a historic European piazza mixed with the innovation that put Boston’s fastest-growing neighborhood on the map, the upcoming retail space will occupy the first two floors of EchelonSeaport, the luxury condo and apartment development that opened in early 2020. 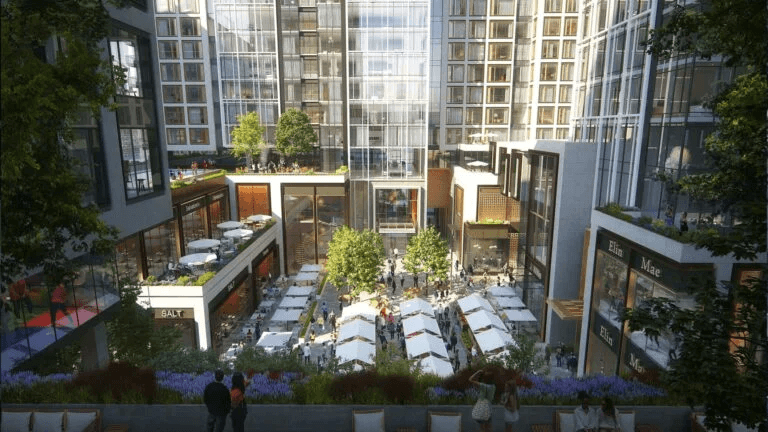 According to plans released by the developer, The Superette’s design is inspired by the “intimate” public squares so typical of European cities. Approximately 40 shops, restaurants and entertainment venues spanning around 125,000 square feet of space will be arranged around a central courtyard, which will host special programming and various activities throughout the year. A tree canopy will add to the European city vibe, and umbrella-shaded bistro tables and public seating will be arranged around the square, encouraging people to relax and stay for a while.

Described as an “experience first” approach to retail, The Superette was designed by the New York office of the renowned design firm Kohn Pederson Fox, which also designed EchelonSeaport. Spanning an entire city block, the outdoor shopping space will also feature lanes of tented booths. Several retailers, including Le Labo, Rag & Bone, Scotch & Soda, Todd Snyder and Vince, have already been lined up for space in the complex. Mack Wheldon and Daniel Cremieux are poised to set up their first Boston locations at the site, which is also expected to host the first New England location for Lucid, the luxury electric vehicle manufacturer.

Another big-name addition to The Superette is Puttshack, which will open its first New England location in the retail plaza. The high-tech mini-golf and fine dining concept has done well in Atlanta and Chicago, where it’s had locations for some time, and it will serve as a central, cutting-edge entertainment and dining destination that’s sure to generate lots of buzz.

Featuring an upscale design with floor-to-ceiling windows, neon lighting and more than 26,000 square feet of space, Puttshack brings mini-golf into the future. Each ball is equipped with Trackaball technology that turns it into a mini-computer. This technology allows each ball to be linked to individual player profiles, automatically tracking scores and moves.

Custom-themed holes along the four courses allow players to play trivia and other mini-games while waiting for their next turn. Players’ names and scores appear prominently on an interactive leaderboard, generating excitement and allowing participants to socialize, dine and drink without having to worry about keeping track of gameplay. The venue will serve up a variety of street foods from around the world, along with beer, wine and craft cocktails.

In addition to Puttshack, which is sure to play a central role in putting The Superette on the map, the complex will include a number of dining venues. The Garret Bars, specializing in speakeasy-style cocktail bars, has already signed on to lease space at the site; this will be the brand’s first location outside of New York City, where it has done well.

So far, one Boston-based brand has signed up for space at The Superette. Seaport Barbers, which already has a location in the Seaport District, will open its second location, a full-service salon, at the site.

In addition to drawing in visitors from around the city, country and world, The Superette will have a built-in customer base as part of EchelonSeaport. The high-end residential complex, specializing in urban resort living, opened in early 2020. All along, the first two floors of the development were to be reserved for retail space, which will run directly along Seaport Boulevard. The new retail space is being designed by the same firm that developed the residential complex, which features 733 condos across two towers with stepped silhouettes and 285 apartments at a third tower, The Alyx.

Work is underway on The Superette now, and the new retail destination is expected to be complete and open for business by the summer of next year.