One Congress Fully Leased with Signing of InterSystems Lease

In the largest lease signing so far in 2022, One Congress – the tallest new office building in Boston since the 1980s – has been fully leased months before construction is complete. On May 3, InterSystems Corp. announced that it would move its headquarters from East Cambridge to the new tower, doubling the amount of space it leases. In signing the lease, the rapidly growing data management provider joins anchor tenant State Street Corp., which is leasing the entire bottom half of the building, and K&L Gates, a law firm. 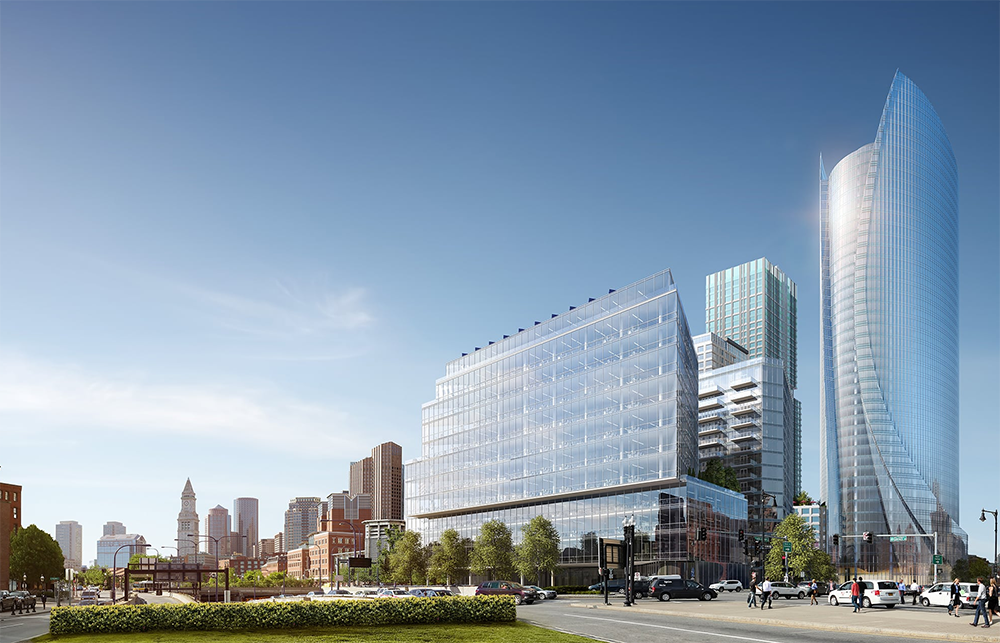 InterSystems currently leases 220,000 square feet at One Memorial Drive in Kendall Square. The rapidly growing firm is approaching $1 billion in revenue, has 25 offices around the world and employs more than 1,800 people. With its move to One Congress, the company will have a new Financial District address in the soaring new office tower, one of six buildings that will make up the Bulfinch Crossing mixed-use development. It’s one of several major lease signings to occur within the last few months, suggesting that Boston’s office space market is starting to recover from the effects of the pandemic.

Upon completion, the 43-story One Congress will stand 528 feet tall. The building will offer an array of cutting-edge, high-class amenities, including a 30,000 square foot rooftop terrace, 30,000 square feet of fitness and wellness space, food and beverage vendors, and state-of-the-art conference facilities. The premises will also include a bike room with 850 spaces and repair facilities. On-site parking with electric car charging stations will also be available. Since State Street Corp. has signage rights for the new property, it will probably be topped off by a prominent sign for the investment firm. 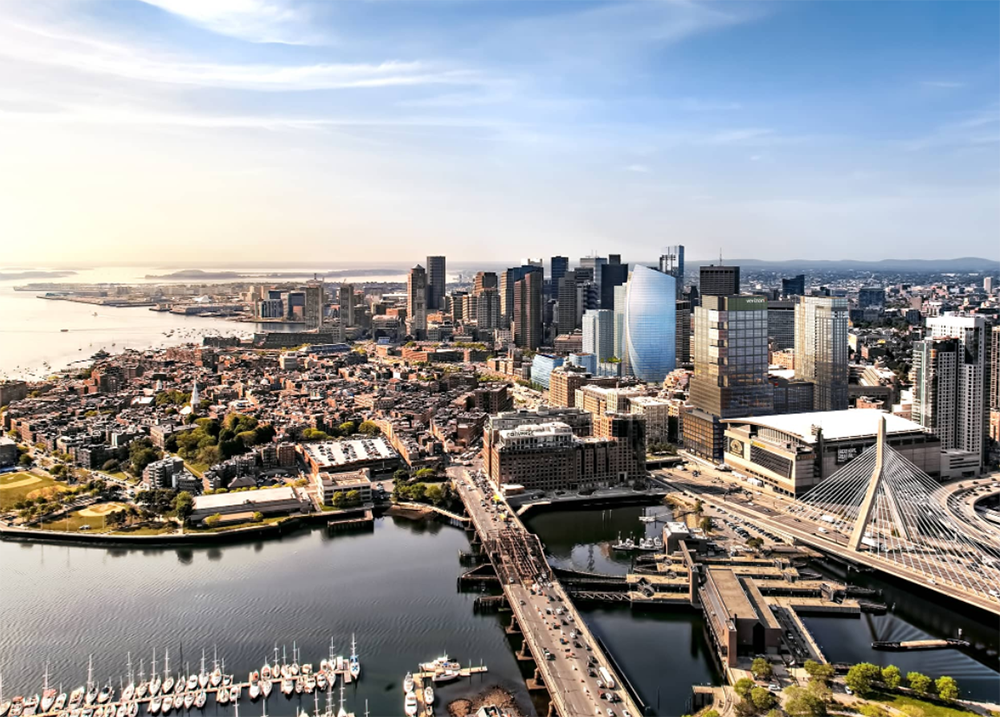 The full leasing of One Congress is a promising sign for the city’s office market, which took a big hit during the course of the pandemic. As of the first quarter of 2022, however, the downtown office market is showing signs of improvement, with asking rents increasing and demand on the rise. Asking rents went up by $2.14 per square foot from the previous quarter for an average of $70.16 per square foot. Class A office space is in exceptionally high demand, suggesting that newly built office buildings will likely attract more tenants than older ones with fewer amenities. 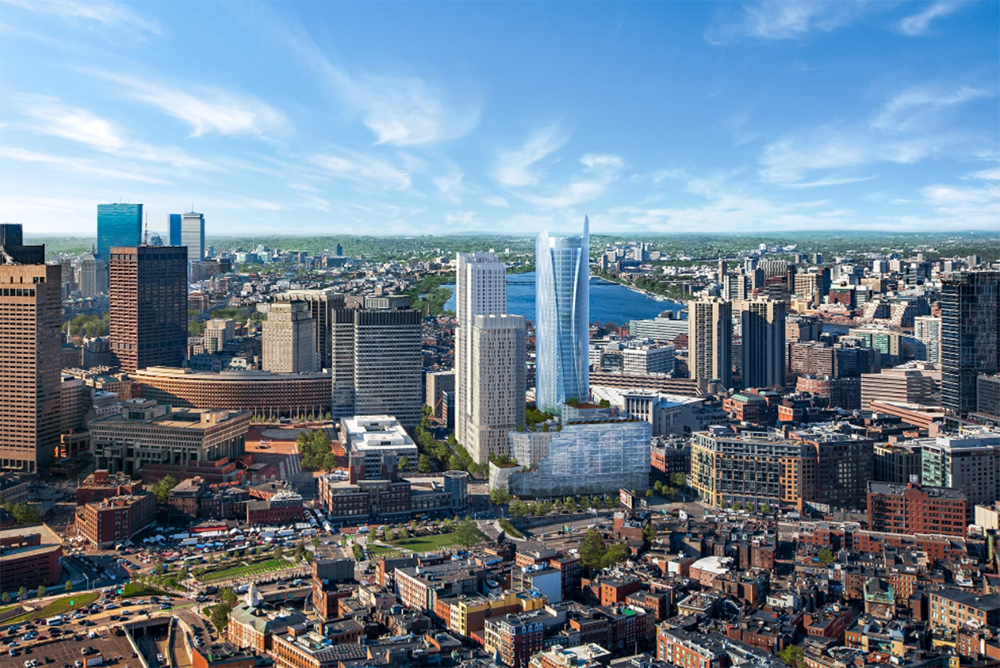 The downtown office market is thriving partially due to the ongoing surge in life science real estate development. Many older office buildings around the city are being retrofitted for use as lab, R&D and biomanufacturing space, but demand is still rampant for new lab space. As older properties are converted for biotech use, demand for new, purpose-built office buildings is apt to increase. Given that One Congress is fully leased months before completion, it’s clear that major tenants still have a strong interest in acquiring office space in the heart of downtown Boston. As part of the underway Bulfinch Crossing mixed-use development, One Congress offers a convenient location and access to shopping, dining and hundreds of new luxury apartments and condos. 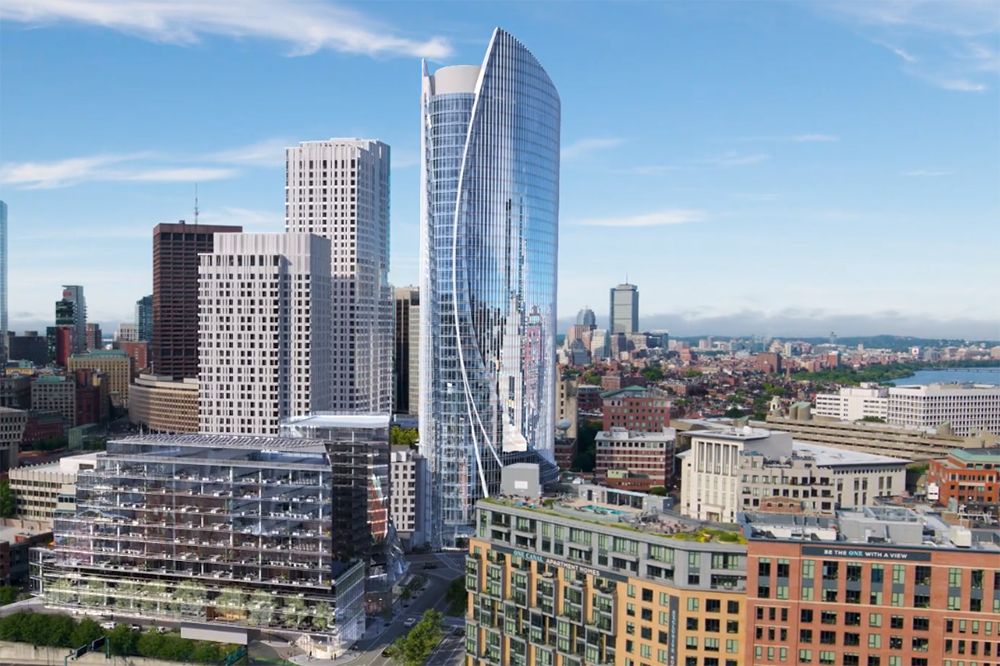 InterSystems Corp. will be the second-largest tenant at One Congress after moving its headquarters there in 2024. State Street Corp., the massive financial services firm, will be relocating from its namesake building at One Lincoln Street in the Financial District after its current lease expires next year. The company originally signed its lease at One Lincoln in the 1990s. In leasing 1.019 million square feet, State Street signed the largest lease deal in Massachusetts history at the time. Today, the company leases 750,000 square feet in the building, subleasing approximately 250,000 square feet of the space. Although it will be leasing the entire bottom half of One Congress, it will occupy less than half the space it did at State Street Financial Center, as the building has been known.

One Congress is one of six buildings being constructed as part of the Bulfinch Crossing mixed-use development project. Located at the Government Center parking garage site, the 4.8-acre site stretches across two city blocks. Between its six mid- and high-rise buildings, the 2.9 million-square-foot development was initially designed to offer 1.15 million square feet of office space, 82,500 square feet of retail space, more than 800 residential units, 200 hotel rooms, 1,160 parking spaces and a net-zero energy pedestrian public square. However, the pandemic upended some of these plans; in particular, the hotel and some of the residential space have been swapped out for a new life science building.

InterSystems and State Street will be the main tenants of One Congress and among the first to move into Bulfinch Crossing. The massive redevelopment project aims to reconnect various neighborhoods and districts, allowing easier access to a part of the city that was transformed by urban renewal in the 1960s and 1970s. It involves partially demolishing and redesigning the Government Center parking garage. Built in the late 1960s, the massive, 2,300-space, above-grade parking garage occupies two entire city blocks.

Site preparation for One Congress involved years of complicated engineering work as contractors retrofitted the existing parking garage for the new development. A massive portion of the still-functioning garage was sliced off, and a new building foundation was poured between the garage and the demolished portion of the facility. The modern office tower features open floorplates and highly efficient building systems. All floors offer 360-degree views of the area, including Boston Harbor, the Charles River, Back Bay, the North End and the Financial District. The building offers easy access to MBTA stations serving the Green and Orange Lines, and it is also close to North Station.

One Congress is just one component of Bulfinch Crossing. It will also feature a 480-foot-tall residential tower. The Sudbury, as the building is known, features luxury apartments for rent and condos for sale. A second residential building, Residential Tower II, will feature nearly 300 residential units across 28 stories. A four-story retail building will offer retail space for shopping and dining. A 14-story building will house a 200-room hotel with luxury condos for sale. The property will also include a boutique office building that may also be used for life science space.

The future home of State Street Corp. and InterSystems Corp. was designed by Pelli Clarke Pelli and CBT Architects and built by John Moriarty and Associates of Winchester, MA. The building features a sleek glass profile and offers modern, cutting-edge amenities and finishes. Approximately 2,500 State Street employees are expected to relocate to the building. As of mid-2018, the company had around 11,750 employees. InterSystems has nearly 2,000 employees worldwide, but it is not clear how many of them will be moving to the building at Bulfinch Crossing. 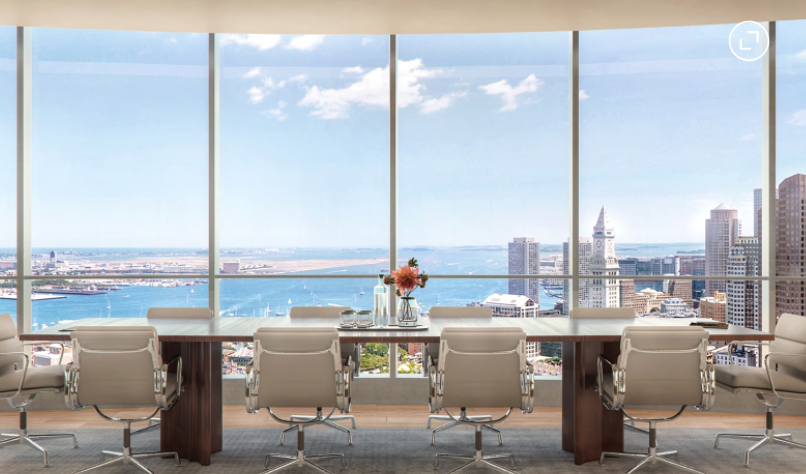 Although Boston’s office space market continues to struggle in some regards, the full preleasing of an under-construction office tower like One Congress is a positive sign. It’s also just one example of the phenomenon, which has been happening more and more lately as companies reorganize in the wake of the pandemic. Another building currently under construction, Winthrop Center, has been seeing a flurry of leasing activity recently as well. Cambridge Associates, an international investment firm, signed a 15-year lease for 116,000 square feet of space in the building, which opens next year. It looked like construction on Winthrop Center may be halted for a while, but the project ultimately continued and is on track and lining up tenants.

Winthrop Center is a project of MP Boston, the local offshoot of Millennium Partners, the massive real estate development firm. In addition to the lengthy review process necessitated by concerns about the building’s shadow, the project almost shut down after construction financing fell through during the first year of the pandemic. However, developers were able to acquire the financing they needed after some searching, and the project continued. Like One Congress, Winthrop Center is being designed with sustainability and energy efficiency in mind. Developers are aiming to make it the largest “passive house” building in the world.

When it is complete, Winthrop Center will be the tallest building in the Financial District. The 53-story office tower will stand 691 feet tall, soaring over nearby properties. In fact, its very height was one of the issues that delayed progress on the project. Concerns over how much shadow the building would cast over Boston Common and the Public Gardens prompted a lengthy development review process for the property. Eventually, Mayor Marty Walsh had to submit a home-rule petition to Beacon Hill to get the project off the ground. It is being built on the site of a former city parking garage, much like One Congress.

Indeed, many above-grade and surface parking lots around Boston have been demolished and redeveloped into various types of commercial real estate over the last several years. Without question, the redevelopment of the Government Center parking garage is the most significant of them all since it will help knit back together many disparate neighborhoods and districts. In its new life as Bulfinch Crossing, the development will open up the area again, allowing people to navigate seamlessly across downtown.

One Congress is described as a “trophy office tower” for its distinctive architecture, soaring height and world-class amenities. The property will feature a three-story lobby. Once State Street Corp. moves in, a sign bearing the firm’s name will dominate the outside of the building. InterSystems Corp. does not have signage rights as part of its lease, so its name will not appear on the outside of the property. The property will be the tallest office building to open in Boston since April 1984, when the 590-foot-tall One Financial Center was built. 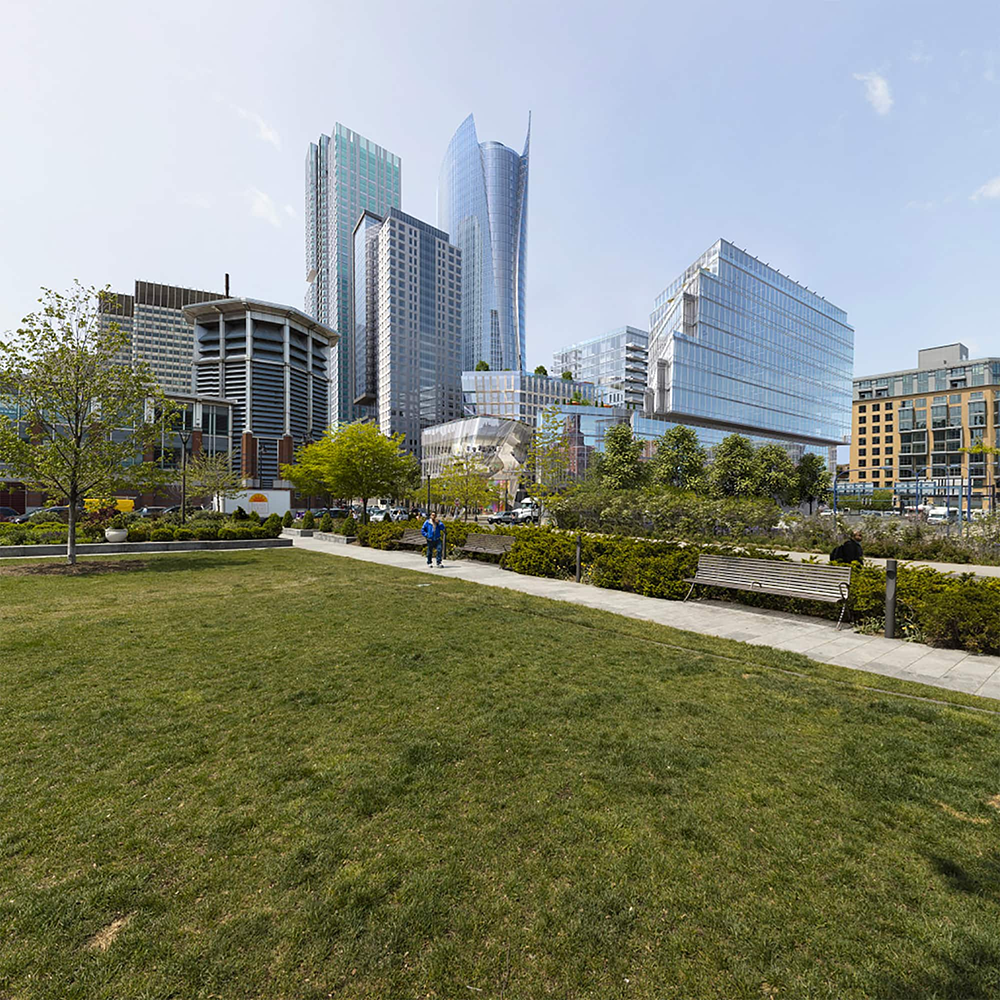 With One Congress fully leased months before construction is complete, demand for Class A office space in downtown Boston and the Central Business District should remain robust for the foreseeable future. Another portion of the Bulfinch Crossing development, a 12-story life science building, will be among the last pieces to be finished. The BPDA only approved plans for the property, which will include lab space, in early 2022. Initially, developers were going to put three additional buildings on the site – a hotel, an office building and a residential building. Now, they are all being replaced by a single life science building.

The new 12-story building will offer a total of 410,000 square feet, including retail space on the ground floor and lab space on the floors above. The original plans also called for a 5,000 square foot plaza. The plaza remains in the revised plans, so the development will still include a decent amount of green space. The lab space is being built on spec, so no tenants were lined up prior to construction. As demand for biotech space continues to surge across the region, however, there’s little doubt about whether or not the final building at Bulfinch Crossing can be fully leased before opening its doors.

In leasing the top 14 floors of One Congress, InterSystems Corp. is emerging as a significant player in the world of data management. While the company is doubling the footprint of its headquarters by moving to the new building, State Street Corp. is slashing the size of its headquarters with the move from Lincoln Street. These changes are just one example of the shakeup that has been occurring across Boston commercial real estate markets since the pandemic started in the early spring of 2020.

With the year not even halfway over, there’s still plenty of time for another, bigger lease deal to be signed in 2022. For now, though, InterSystems Corp. enjoys the distinction of signing the largest lease deal of the year. Considering that a newly built, 1 million square foot office tower has been fully leased before completion, it’s safe to say that Boston’s office space market is showing signs of improvement. As part of the more extensive Bulfinch Crossing development, One Congress is sure to become one of the most iconic buildings on the Boston skyline. It will play a role in reconnecting this part of the city and breathing new life into it.