Some of the most valuable real estate in Boston is about to get a big facelift. During the last week of January, a letter of intent was filed with the Boston Planning and Development Agency regarding the redevelopment of prime commercial real estate along Boylston Street in Back Bay. Tavistock Development Company of Orlando, Florida, seeks to develop a 68,000-square-foot project in the center building located at 761-793 Boylston Street. The two iconic restaurants at the site, Abe & Louie's steakhouse and Atlantic Fish Co., will remain; Crate & Barrel's fate is uncertain. 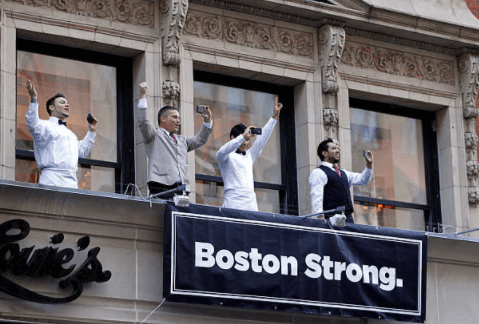 It should come as no surprise that the developer is also seeking to "reprogram" approximately 32,800 square feet of retail space at the site, given the ongoing effects of the COVID-19 pandemic. In its letter of intent, Tavistock was unclear about the target of this reprogramming. However, given that the two restaurants will remain open during redevelopment and will continue to operate out of the space after, Crate & Barrel is more than likely on the chopping block. The company did not return requests for comment from the press.

Before the pandemic, Boylston Street, Newbury Street and other major thoroughfares in Back Bay were constantly buzzing with retail and restaurant activity. Thanks to shutdowns, remote working and other developments brought on by the pandemic, however, numerous businesses in the Back Bay have shuttered their doors. The most noteworthy casualty of the pandemic in Back Bay has to be the closing of the Lord & Taylor store on Boylston Street, but many other establishments went out of business over the past year. In attempting to "reprogram" the space at 761-793 Boylston, the developer is likely seeking to cope with the new normal brought on by the pandemic.

In its letter of intent, Tavistock outlined preliminary plans for the site. The developer acquired the land in question in 2018. It plans to build up five stories behind the original structure at the site; the new floors will be set back three feet from the existing facades. The historic facades will be preserved. The new five-story structure will include nine residential units, 23,500 square feet of office space and 15,700 square feet of retail space. Given the popularity and fame of the two restaurants at the site, it's safe to say that the space will be leased quickly.

Tavistock plans to file detailed plans with the BPDA by February 18, so we will know more about the project then. For now, it is unclear when construction will start or when it should be finished. The developer owns more than 55,000 square feet along Boylston alone, and it has many other projects in the works around Back Bay and Greater Boston. With its sister company, Tavistock Restaurant Collection, the developer has also proposed Commercial Wharf's redevelopment in the North End. It acquired Joe's American Bar & Grill and an empty, burned-out lot adjacent to it, a while back. The property, situated at 88-91 Commercial Wharf East, is another example of the developer's influence across the region.

Due to the size of the proposed development at 761-792 Boylston Street, it must meet Large Project Review requirements. Therefore, the developer will have to undertake reviews of transportation, shadows, infrastructure, air and noise and historic resources, among other steps, to obtain approval from the BPDA. The property is currently zoned General Business District, but many overlay districts are at play too, including one involving historical preservation. The developer already appears to be accommodating the latter by preserving the existing, historic building facades.

Incredibly, this is not the only project seeking to redevelop space above existing businesses on Boylston Street in Back Bay. C. Talanian Realty is exploring development options for the property at 903 and 907 Boylston Street, for example. With retail establishments and restaurants hit particularly hard by the pandemic, Back Bay could be in for lots of redevelopment projects in the near future as local businesses find ways to adapt. For now, stay tuned as Tavistock is expected to file detailed plans regarding the project above two of Boston's best-known restaurants.