Demand for prime life-science and laboratory space continues at a fever pitch across Greater Boston. Unlike many industries, the life sciences industry flourished during the pandemic, supercharging the region’s already robust biotech scene. With construction costs – and demand – at all-time highs, tenants are scrambling to secure suitable lab space across the region, and office-to-lab conversions are more popular than ever. This is evidenced by the recent announcement that Alexandria Real Estate Equities will acquire the Charles Park office complex at Kendall Square for $815 million in a deal expected to close in December 2021. 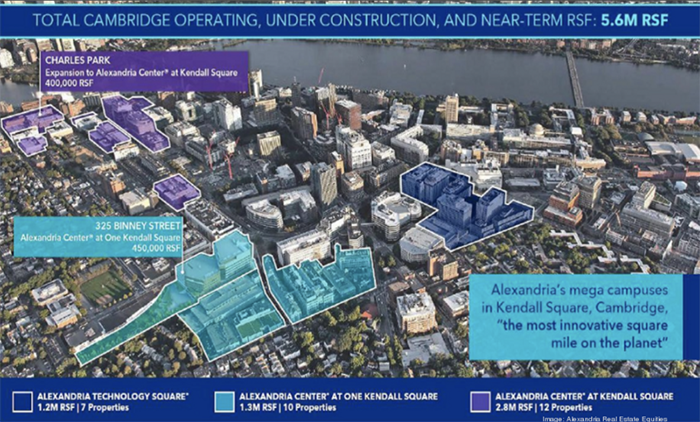 This is the second time the property in question has changed hands in the last six months. In Mach 2020, The Davis Companies and Principal Global Investors secured a $491 million loan to acquire and convert the complex – Charles Park One and Two – into a lab campus. That deal closed in late December 2020, and the owners secured leases with many prominent life science firms. These firms will likely eventually replace current office tenants at the complex, which include IBM and Aetna.

The acquisition of the Charles Park property is a bit of a departure for California-based Alexandria Real Estate Equities, which already has a massive footprint across the Greater Boston region. In Kendall Square alone, the firm has developed three biotech clusters. However, these developments have typically been built from the ground up. Alexandria is entering into the office-to-lab conversion space with the latest deal, which is a significant departure from its usual strategy of developing purpose-built biotech properties – at least in the Cambridge area. Outside of Cambridge, the firm has acquired some conversion projects, including the former athenahealth campus in Watertown, the property across from the MBTA Riverside Green Line station in Newton, and the former Landmark Center in Fenway.

There’s a lot of debate about the pros and cons of lab conversions versus purpose-built lab properties within the industry. Many developers feel that purpose-built properties are superior to conversions, viewing the latter as more trouble than they’re worth. However, Alexandria stated regarding the recent deal that it sees a distinction between individual office-to-lab conversions and expanding existing lab cluster buildings. The company plans to make significant investments into base building infrastructure in these conversions, ensuring its ability to attract top-of-the-line life science firms.

Alexandria is hardly alone in entering the lab conversion fray. Lately, another life science REIT, BioMed Realty Trust, has scooped up several office-to-lab conversion deals across Greater Boston. These include the former John Hancock headquarters at 601 Congress Street in the wildly popular Seaport District – a burgeoning life science hotspot – and several other properties. More than likely, these conversions will become more popular still in the months ahead as demand for space, rock-bottom vacancy rates and a continuing slowdown in new construction continue. As for the Charles Park development, Alexandria expects to close on the $815 million deal sometime in December of this year. Stay tuned to Boston City Properties for continuing coverage of Boston’s white-hot life science market.