Development activity in the Fenway has been at a fever pitch lately. If a proposed development outside Fenway Park gets approved, the neighborhood is in store for another major round of construction activity. On January 29, WS Development and its partners – Fenway Sports Group, the Red Sox’s parent company, and the D’Angelo family, owners of the team store – filed a letter of intent with the Boston Planning and Development Agency. The developers seek to develop a mixed-use complex spanning 2.1 million square feet across eight acres just outside the park. This project would include permanently closing Jersey Street for pedestrian use. 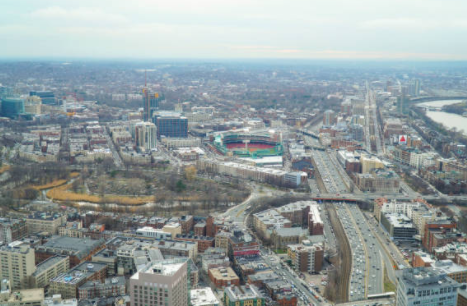 The proposed development would span 13 properties near Fenway Park. They will be situated across several thoroughfares, including Brookline Avenue and Lansdowne, Jersey and Van Ness streets. When the project was initially proposed back in October, plans only called for the development to span five acres. The three additional acres come from Parcel 8, which is now included in the proposal and includes air rights above the Mass Pike. Although Fenway Sports Group has the right to develop the parcel, the company stated that it would not pursue any air rights project over the Pike.

The eight buildings that are included in the proposal would accommodate a number of different developments. The developer envisions the 2.1-million-square-foot mixed-use development including commercial space for offices and the like, a residential tower, space for restaurants and retail, and, more than likely, space for life science and lab development. The latter is especially relevant in today’s commercial real estate climate, which has biotech firms scrambling to secure suitable life science space. Hotspots like Kendall Square are full, for all intents and purposes, and space throughout the Seaport – another major life science hub – is challenging to secure too.

The properties that are included in the proposal include the following:

In addition to developing eight buildings spanning various uses, the proposal calls for the expansion of Richard B. Ross Way from Boylston Street to Brookline Avenue and the revitalization of Arthur’s Way. Jersey Street, directly in front of the park, will be permanently closed to vehicle traffic, creating a year-round gathering place for fans and revelers. The developer envisions Jersey Street lined with a variety of storefronts and taller buildings.

Some of the proposed buildings will be constructed on a large surface lot across Brookline Avenue from Fenway Park. They will also be built on the Landsdowne Street site, which currently includes a two-story garage and an ATM. There are open-air lots on Brookline Avenue and Van Ness Street, where some of the other buildings will be constructed. The developer has also stated that they might seek approval for an air rights development over the Pike and behind the existing garage in the future. However, such projects take many years to come to fruition, so it will be a while before anything happens there.

Although a lot of construction activity will be happening at once near Fenway, several local businesses should be unaffected. House of Blues and the Landsdowne Pub, for example, will continue operating as usual. The future of another restaurant, Bullpen Kitchen & Tap – the former Who’s on First? – is unclear at this time.

The redevelopment of the streets around Fenway Park, the longest active ballpark in the U.S., is just the latest in a flurry of development activity in the neighborhood. Currently, work is getting underway for the new Fenway Center development that’s being built over the turnpike and along Beacon Street on the other side of the David Ortiz Bridge. Recently, IQHQ and Meredith Management paid Mass DOT a record $55 million for two acres over the Pike. The developers are building a 90,000-square-foot deck there connecting Beacon Street and Brookline Avenue, upon which the second phase of the 700,000-square-foot Fenway Center, featuring office and lab space, will be built. Therefore, expect to see a lot of construction cranes and activity happening in Fenway for the foreseeable future.