Although construction won't begin for several years, MIT recently revealed more information about its huge Kendall Square redevelopment project. In a filing for a special permit with the city of Cambridge during the first week of February, the school shared a more detailed vision about how the 14-acre site will look upon completion. Today, the site is primarily made up of parking lots and fenced-in grassy areas; upon completion, it will include eight residential and office towers, more than two acres of open space, a community center and new streets that will integrate the block into the surrounding neighborhood. 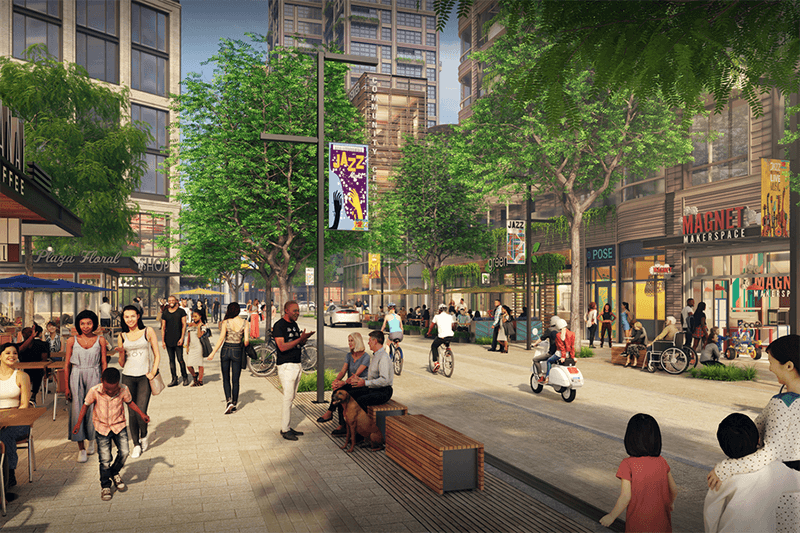 The major redo of the Volpe Transportation Center site has been in the works for some time. MIT is purchasing the site in a $750 million deal that it made with the federal government. Before the school can start building any of the planned office and residential towers, however, it must meet the requirements that it agreed upon with the General Services Administration. Specifically, the school must construct a new building for the federal transportation research center that has been located at the site for many years. The building, located on four acres on Binney Street, is currently under construction and scheduled to open in late 2023.

Thanks to the new filing, we now know a lot more about the overall look and feel of the huge redevelopment, which will help make Kendall Square look and feel more like a connected neighborhood where people can live, work and play. The permit filing reveals that towers of up to 382 feet may be built on the site, for example. Several fairly tall buildings are permitted, so the block will look a lot different when the project is complete. The filing reveals more details about the proposed buildings' look and feel and even outlines how many trees are being planted.

In a zoning request that the Cambridge City Council approved in 2017, the developer revealed that the project would encompass 1,400 residential units and 1.7 million square feet of office and lab space. MIT agreed to earmark 20% of the residential housing for low- and moderate-income residents, and the school also made concessions to businesses vying for space in the development. A full one-quarter of street-level storefronts will be reserved for small, independent businesses rather than chains and major stores.

Additionally, MIT agreed to contribute $10 for every square foot of non-residential, non-governmental space that is developed at the site. Given that plans call for nearly 2 million square feet of office and lab space, it's safe to say that MIT will be forking over several million dollars. The money will be split between community needs and improvements to local transit and Kendall Square.

Upon completion, the 14-acre site will feature a large, grassy expanse near the center. Promenades lined with storefronts will extend around the open space, creating a Main Street shopping experience along Third Street and Broadway. So far, plans do not outline how new streets will be built and how they will connect out into the rest of Kendall Square. However, the developer wants to transform the site to be a more cohesive part of the neighborhood. With thousands of residential units going in, these improvements will make the neighborhood more diverse.

The planned office and lab space is sure to be snagged quickly, even amid the pandemic, as the region's life sciences sector continues to flourish. However, don't expect to see any really big changes anytime soon since the new federal transportation research center must be completed before anything else is done.