Green Light Given for Expansion of Brookline’s Coolidge Corner Theater

Long-awaited plans for expanding and improving the beloved Coolidge Corner Theater in downtown Brookline are about to become a reality. Recently, the theater announced that it has reached 85% of its $12.5 million capital campaign goal and plans to break ground on the project this summer. Plans for the renovation and expansion of the theater have been in the works for more than 10 years. Having now weathered the hardships wrought by the pandemic, the theater seeks to increase its revenue potential and enhance the guest experience while retaining as many original Art Deco features as possible. 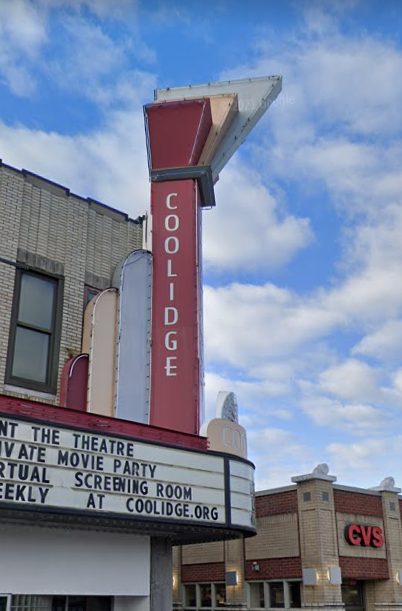 The famous theater, a landmark in Brookline, dates back to 1933. Its Art Deco design and bold marquee have brightened up this section of Coolidge Corner for nearly a century now, and very few updates or expansions have been made throughout its history. To raise funding for the project, the theater launched its Campaign for the Coolidge effort a while back. The campaign has been an overwhelming success, and the theater has collected thousands of donations, large and small. The project will add more than 14,000 square feet to the existing structure, and the theater will remain open throughout construction.

According to plans released about the project, the main entrance will be moved to the Centre Street parking lot at the rear of the building. Upon entering, guests will be greeted with a glass-walled lobby where they can purchase tickets and concessions. Those waiting in line for tickets may do so either inside the building or outside beneath a cantilevered overhang. The second story of the structure will be expanded, and a third story will be added. The new top story will include two new theaters seating 57 and 150 people, respectively. This brings the total number of screens to six and increases seating from 729 to more than 900.

The third story will include a new 60-seat community education and engagement center that can be used for board meetings, receptions and other events. Currently, the theater books space at nearby venues for such occasions. The Plans also call for an adjacent catering kitchen and rooftop deck. Two new theaters will also be added to the third floor, providing even more options for screenings, first-run films and other events, providing the theater with extra flexibility well into the future.

Before the pandemic, Coolidge Corner Theater had an annual attendance of about 250,000, and it hosted more than 7,500 screenings and events per year. Approximately 75% of its annual income came from ticket sales and concessions. During the shutdown period, the theater held virtual film programs and outdoor screenings to stay afloat. It also performed updates on the interior, including new carpeting, paint, seating and a military-grade air purification system. Due to escalating construction costs post-pandemic, the original budget increased by $1.6 million. Groom Construction of Salem will perform the work, and groundbreaking is imminent. Steel will be erected in September, and developers hope to have it wrapped up by August 2022.