As part of its ongoing efforts to expand its substantial footprint beyond Kendall Square, where developable space is at an all-time low, Alexandria Real Estate Equities has partnered with Newton-based National Development to construct a life science/office building at 15 Necco Street in the Seaport. Situated directly on Fort Point Channel, the parcel is one of three that the partnership has acquired over the last few years. Another, 5 Necco Street, is being leased back to General Electric Co. for use as its world headquarters. 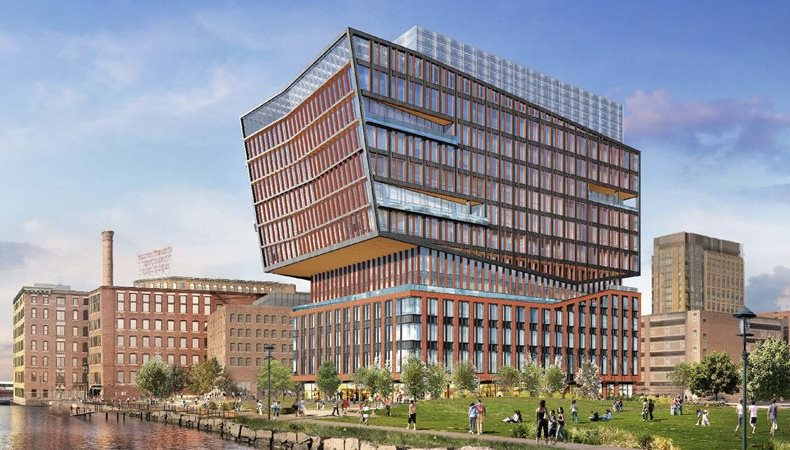 Currently undergoing the permitting process, the proposed lab/office building at 15 Necco Street will stand 12 stories tall and offer approximately 316,000 square feet of multitenant life science, office and research and development space. No parking is expected to be developed for the site because of its proximity to numerous parking lots, parking garages, and public transportation options. The property is expected to include substantial amounts of ground-floor retail and restaurant space and “community touch down” space, which will be open to the public for work and collaboration.

Under an entity called ARE-MA No. 74 LLC, the two development firms purchased the site from General Electric in May 2019 for $252 million. The same partnership acquired the adjacent lot, 10 Necco Street, for $81.8 million in March 2020; a multi-level parking garage on the site is expected to be razed.

In July 2021, a $16.9 million foundation permit was awarded for the site at 15 Necco, paving the way for construction to begin. In late October, the city issued the building permit, and additional permits are currently working their way through the system. Tower crane installation is expected to commence in early 2022, and steelwork should start before the end of the winter. Beyond that, no additional information regarding the timeline of the new lab/office building – in particular, its projected completion date – has been released.

Located on the eastern end of Fort Point Channel, 15 Necco Street will be designed to dovetail into a new park that’s being developed on a neighboring 6.5-acre site. Formerly made up of parking lots, Proctor & Gamble sold the parcel to development firm Related Beal, who is designing the new park. As noted above, 15 Necco Street is next door to the site of GE’s new headquarters, a historic former warehouse that has been extensively renovated for the new tenant. The 95,000-square-foot building has been leased to GE for 12 years.

Many changes have been made to the initial design of the proposed structure at 15 Necco Street. For example, it was initially to have a glass façade but will now have one dominated by red brick, like others nearby. The GE building was originally slated to have a “solar veil” on top, but those plans were also nixed along the way. Part of the plan for the lab/science building at 15 Necco includes raising the street at least 20 feet above the current water level of Fort Point Channel, a move being made to combat future seal level rise.

The upcoming life science/office/R&D building is one piece of a 650,000-square-foot life science campus envisioned by Alexandria, which covers the parcels at 5, 10 and 15 Necco Street. The life science developer has been busy expanding its reach beyond Kendall Square in Cambridge, and much of its efforts have been directed toward South Boston. For example, in partnership with Anchor Line Partners, Alexandria is developing a six-story lab property at 99 A Street. Stay tuned to Boston City Properties for updates regarding these and other projects in the future.