More significant changes are just ahead for a popular section of Back Bay after a year that wreaked havoc on restaurants and retail establishments. In a filing to the Boston Planning and Development Agency On March 9th, Orlando-based Tavistock Development Co. outlined plans for the redevelopment of 761-793 Boylston Street. The developer finally revealed that the existing Crate and Barrel store would be demolished to make way for a new mixed-use development. However, the restaurants on either side of it – Abe and Louie’s at 793 Boylston and Atlantic Fish Co. at 761 Boylston – will remain. 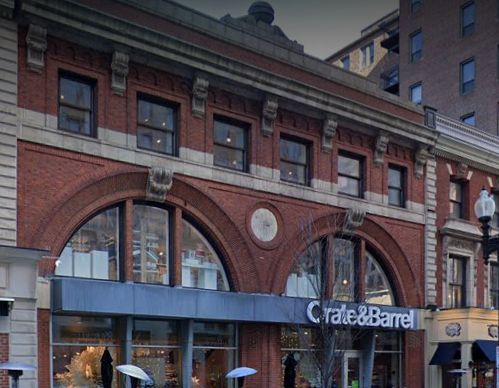 Construction of the new mixed-use project is expected to begin during the first quarter of 2022. The Crate and Barrel store, which is located at 777 Boylston, will presumably be demolished before then. However, the developer has not indicated precisely when demolition will occur. The developer believes that construction will take 18 to 22 months, so the mixed-use development likely won’t see the light of day until sometime in late 2023 or early 2024. In plans filed with the city, the developer indicated that it would preserve the façade on the sidewalk side of the existing building.

So far, the developer has not indicated what is replacing the Crate and Barrel store. However, it has been suggested that a new retail concept will likely be introduced into the space at some point. Under the terms of the proposal, five additional stories will be added to the current three-story building – one of four buildings at the site that were built between 1901 and 1908. This will bring the central building up to eight stories tall. The first and second floors will include 15,830 square feet of retail space. Floors three through five will feature 25,720 square feet of office space. The sixth through eighth floors will feature nine residential units totaling around 18,600 square feet.

The five new stories will be cantilevered over the existing three-story building. The developer states that the addition will help tie together the existing building and surrounding ones, featuring a warm, red terracotta design. Access to the residential floors and office space above will be through a new, shared lobby space at the ground level, which will include an entrance onto Boylston Street. The outdoor seating areas for the two restaurants will be upgraded with new pavers and concrete.

Specific information has not been made available about the residential units that will be featured on the top three floors of the building. However, these will likely be luxury condo units based on what’s available in the surrounding area. The proposal filed with the BPDA also indicated that rooftop amenity space might be included, presumably to provide residents of the building with a private area to gather and take in views of the city. With two of Back Bay’s most popular restaurants on the same site, the mixed-use development is likely to generate a lot of interest once units go on the market.

In the wake of the pandemic, developers are scrambling to adjust plans for various projects around the city. Although many restaurants, bars and shops have closed for good in the Back Bay since the onset of the pandemic, the area remains one of the city’s busiest shopping destinations. The “unique retail concept” being discussed for the former Crate and Barrel space will likely take many cues from the new, post-pandemic world, including self-checkout kiosks and other high-tech touches. However, office space vacancy rates remain high, so the offices in the new building may not be fully leased for some time.