The sound of cannonball fire on November 15th signaled the start of a major transformation of a significant section of South Boston. At the groundbreaking ceremony for the long-anticipated Washington Village mixed-use project at 235 Old Colony Avenue, Civil War reenactors representing the 9th Massachusetts Battery fired a cannon that fittingly was built in that part of Southie in 1862. The cannon fire signaled the start of the construction of the project’s first phase, which will include a mixed-use building housing 214 apartments and approximately 20,000 square feet of ground-floor retail and restaurant space. 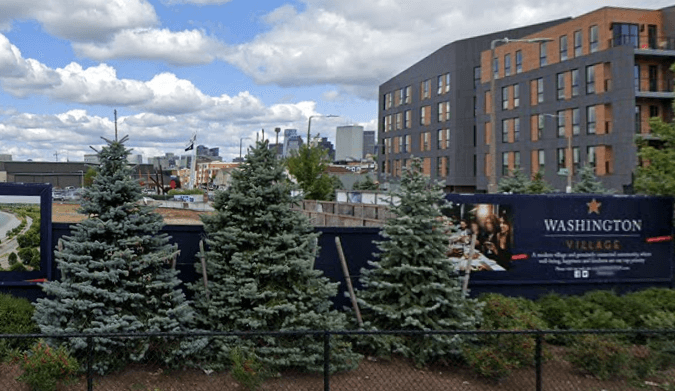 Located at the triangular parcel bounded by Dorchester Avenue, Old Colony Avenue and Dorchester Street, known as Andrew Square since the late 1800s, the new development’s name harks back to the area’s original one. Indeed, in the mid-1800s, the land was named Washington Village in honor of the time that George Washington occupied Dorchester Heights in 1776. It was renamed in honor of late Massachusetts Governor John A. Andrew in 1891. Once the new mixed-use project is complete, the name “Washington Village” will return to the area again.

The groundbreaking was a long time coming. Core Investments, Inc. proposed initial plans for Washington Village in early 2015. Later, the firm brought on Samuels & Associates as a partner, and planning continued. Plans were approved by the Boston Planning and Development Agency on January 16th, 2020, following a few changes.

All told, Washington Village will consist of seven new buildings ranging from three stories to 21 stories in height. The tallest building will be 85 feet tall – a bit taller than the 70-foot maximum height called for in the original plans. The mixed-use development will sprawl across six distinct city blocks and encompass more than 1 million square feet. It will feature more than 650 housing units, including rental units and homeownership units.

The project will also include approximately 99,000 square feet of commercial and retail space and nearly 650 parking spaces. A landscaped park area called “The Green” is also a significant component of the development, which is slated to include 120 new trees and space for the South Boston Historical Society.

The mixed-use development will also include more than two acres of new streets, plazas, pathways and landscaped open spaces. Its proximity to the MBTA Red Line Andrew Station will qualify it as a transit-oriented development.

Industrial buildings and a surface parking lot on the site have been demolished. These included structures that were once part of an iron foundry that produced cannonballs during the War of 1812 and guns, cannon and ammunition for the Union Army during the Civil War.

For now, the focus is on phase-one construction, which will result in the new apartment building with 214 units – including 37 income-based units – and around 20,000 square feet of ground-floor retail and restaurant space. The building will feature 58 parking spaces, with 50 of them on the ground floor of the building and eight on the street.