It's been a long time coming, but the highly anticipated Mattapan Station redevelopment project is underway. The initial letter of intent for the project, which will bring nearly 150 new residential units to the neighborhood, was filed in August 2017. The developers, Preservation of Affordable Housing (POAH) and Nuestra Comunidad Community Development Corp., received approval from the Boston Planning and Development Agency in February 2018. They initially planned to begin construction in early 2020. Due to the onset of the COVID-19 pandemic, the timeline was pushed back again. Construction finally started in November 2020. 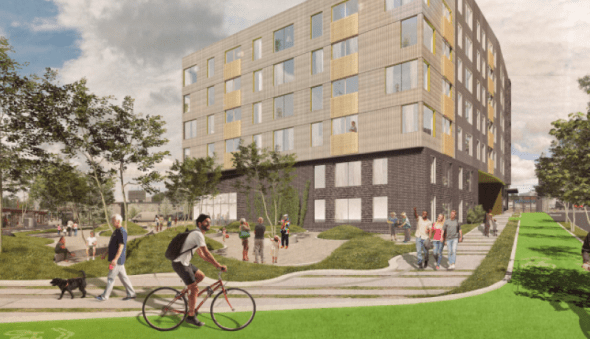 Located at 500 River Street, the $57 million mixed-use development will have a total gross floor area (GFA) of 166,750 square feet. Currently, the 2.5-acre site, which is bounded by River Street, Blue Hill Avenue and the Neponset River Greenway, is developed as a parking lot. The developers obtained a 99-year lease for the land on which the new development will sit. A transit-oriented project, the mixed-use development will consist of two buildings. The first and primary building, currently under construction, will include 133 mixed-income apartment units, 10,000 square feet of commercial and retail space and a 2,000-square-foot community room.

The first building, being constructed during phase one, consists of a midrise building that will be five stories tall along River Street and six stories tall at its southern elevation, which abuts the trolley and bus station. In addition to the 133 apartment homes, which will be located on floors two through six, the building will feature two townhouses with at-grade entrances. The building will include studios as well as one-, two- and three-bedroom apartment homes. According to the proposal, 30% of the units will be deeply subsidized at 30% of the Area Median Income (AMI), and another 20% will be subsidized at 50% of AMI. The rest will be at 60% or 80% AMI.

Originally, plans called for the construction of below-grade parking to accommodate 70 residential parking spaces and for the preservation of 50 existing commuter spaces at the MBTA lot. Due to the presence of bedrock at the site, however, the underground parking structure has been eliminated. Instead, another parking area with 30 to 35 spaces will be constructed across River Street from the development. The community room in the first building will have an entrance onto the Greenway. It is hoped that ground-floor retail – including a potential restaurant with a liquor license – will improve foot traffic and otherwise revitalize the area.

The second building, which will be constructed during phase two of the project, will be located on the east side of the MBTA bus loop facing River Street. The four-story, 10,500 square-foot building will include nine condos, which will be listed for sale and available for homeownership. Since the first building's construction only began in November 2020, it likely won't be completed until February 2022. There has been no word regarding when the second phase of construction will begin, but it likely won't happen until the first building is finished.