Construction of the first building of Allston Yards, a sprawling mixed-use project many years in the making, has begun. Building A, as the initial building is being called, will include 165 residential units and a brand-new Stop & Shop grocery store. Construction of the second building, slated for office and lab space, is expected to start in the third quarter of 2022. The timeline for the entire 1.2-million-square-foot mixed-use development, which will include 350,000 square feet of office and lab space, 117,000 square feet of retail space, more than 850 residential units and a one-acre community green space, is expected to extend to nearly 10 years. 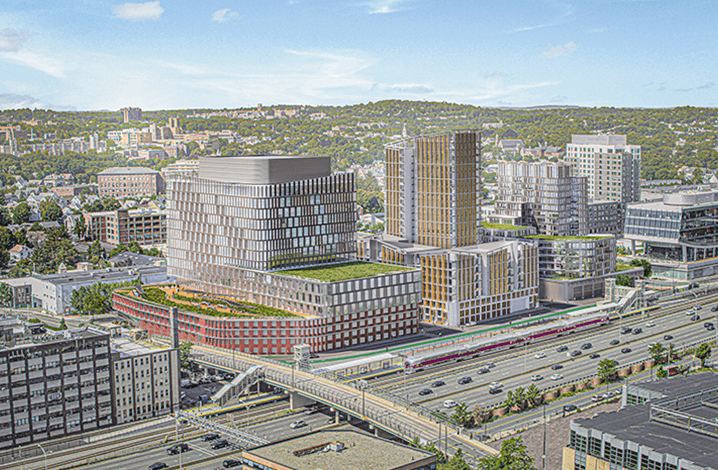 The project has been some time in the making, mainly thanks to a two-year-long community process resulting in many changes to developers' original plans. Initially, the developers – Quincy-based Stop & Shop, Boston-based New England Development, Maryland-based Southside Investment Partners and Maryland-based Bozzuto – envisioned a mixed-use development at the site at 60 Everett Street with more than 1,000 new housing units. After much back-and-forth between developers, community leaders, and city officials, the project's overall density was scaled back, and contributions to transportation and housing by the developers were increased.

Allston Yards, as the new mixed-use project is being called, represents a significant departure from the way the area has been developed through much of its history. Through the early part of the 20th century, the site was occupied by the Arthur C. Harvey Co., otherwise known as Harvey Steel. It remained primarily industrial for many years, including through the 1960s construction of the portion of the Massachusetts Turnpike that runs through the neighborhood.

Stop & Shop purchased the site in 1997. After spending millions on environmental remediation efforts – much-needed because of the long-term industrial use of the site – the grocery store chain built a 100,000-square-foot plaza, which opened in 1998. Since then, the area has been dominated by the Stop & Shop, a HomeGoods, a Dollar Tree and large expanses of paved parking lots.

As demand for housing near public transit and close to downtown Boston increased, developers started seeing opportunities for this once-industrial section of Allston. Allston Yards will be located next to the Boston Landing commuter rail station, which opened in 2017 to serve the adjacent Boston Landing mixed-use development. Boston Landing is still underway, but much of it has been completed. Currently, the development includes the New Balance world headquarters, apartment buildings and practice facilities for the Boston Bruins and Celtics. Shortly, the site will also include a concert venue, a nine-story lab building and a track and field facility.

Developers behind Allston Yards envision it as a crucial connection point where Brighton, Allston and Boston Landing converge. The development will include new connections to the Boston Landing MBTA station and new public open spaces, including the one-acre "community green" that will host events like farmer's markets and concerts. The project will eventually feature 895 residential units ranging from studios to three-bedroom homes, including apartments, townhouses, and condos. Approximately 12% of these units will be ownership units, and 148 will be income-restricted.

The Allston Yards project will create 2,500 construction jobs and 2,000 permanent jobs – primarily associated with the new Stop & Shop. The project timeline was designed to ensure that the existing Stop & Shop could remain open until the new one is ready. The first building, which is now underway, will feature a contemporary design with warm, industrial color palettes and materials like steel, wood, brick, glass and metal paneling. Stay tuned to Boston City Properties for future updates regarding Allston Yards.