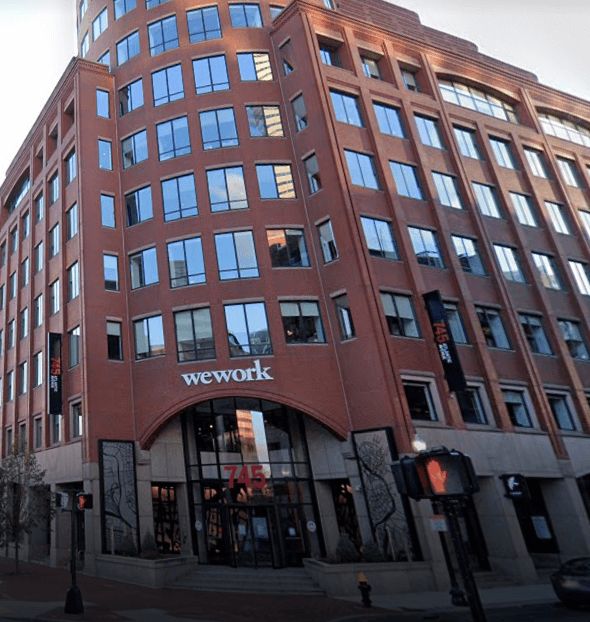 Just a handful of years ago, it seemed like WeWork had a permanent toehold in the city of Boston. Today, one of the co-working company’s most important sites in the city is poised for conversion into lab space.

In a clear sign of the upheaval wrought by the Covid-19 pandemic, the BPDA board approved plans to convert the 11-story brick office building at 745 Atlantic Avenue into approximately 155,000 square feet of space for lab, R&D and office use. The approval, which came on Thursday, February 10, paves the way for the building’s owner to convert the Leather District site. Although the owner, Oxford Properties, doesn’t have a tenant in place to lease any space in the converted structure, the Toronto-based firm plans to begin work sometime this spring.

Oxford Properties, one of the largest property owners in the area with a portfolio of more than 4.5 million square feet across Boston and Cambridge, acquired the property from Beacon Capital Partners in 2015 for $114.5 million. The building was 75% leased by WeWork, which exploded on the scene in Boston in 2014, quickly becoming the second-largest occupier of office space in the city. The property at 745 Atlantic Avenue was WeWork’s first in Boston; at one point, it was the company’s largest facility in the U.S.

However, after a series of stumbles – including a disastrous IPO in 2019 followed closely by the onset of the pandemic – the co-working giant saw demand for office space evaporate. WeWork defaulted on its lease and vacated the premises earlier in 2021. Oxford Properties subsequently sued the company in May of that year to the tune of $1.8 million – the total amount of unpaid rent. Late in January, the companies jointly agreed to dismiss the dispute.

Seeing the writing on the wall for WeWork and wanting to “future proof” its investment, Oxford Properties submitted the proposal for converting the property to lab space to the BPDA in August 2021. Despite being one of the largest property owners in the city, it was Oxford’s first time presenting to the board.

To counteract concerns by Leather District residents and business owners about adding more height to the building, the developer announced that it would convert the top two floors into a mechanical penthouse rather than add a tall penthouse to the roof. Lab conversions require higher floor-to-ceiling heights, redundant power sources and sophisticated HVAC and mechanical systems, so they are usually best suited for newer buildings. The property in question was built during the late 1980s.

The developer has stated that converting the top two floors to a mechanical penthouse is the most sustainable way to proceed. As part of the conversion, eight parking spaces will be eliminated.

At the time of the approval, two additional tenants remained in the building. They are currently vacating the premises because their leases are almost up. However, the La Colombe coffee shop on the ground floor will remain. Oxford also plans to develop approximately 4,100 square feet of new ground-floor restaurant space at the site.

Gilbane Building Co. will be the general contractor for the conversion work, which should kick off sometime in the spring. The developer expects the site to be ready for occupancy by mid-2023.