The long-defunct Edison Power Plant, whose twin smokestacks have long served as a landmark for South Boston’s eastern gateway, will soon be a distant memory. On January 15, the Boston Planning and Development Agency approved a proposal for the former power plant site. The proposal calls for the development of a sprawling mixed-use development, including the adaptive reuse of four turbine halls. It will include more than 600 housing units, a 240-room boutique hotel, 860,000 square feet of mixed-use space and 5.7 acres of open community space. The price tag is estimated at around $1 billion. 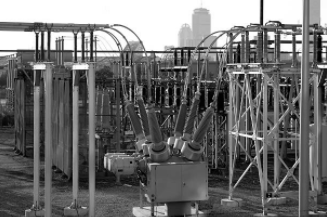 A joint venture between Hilco Redevelopment Partners and Redgate Capital Partners, the proposed project at 776 Summer Street is one several years in the making. The partnership purchased the site in April 2016 from the Exelon Group for $24 million, and a years-long review process unfolded from there. Since early 2017, the property owners have met with locals from around the neighborhood, gauging their interest in the mixed-use development and fielding their questions and concerns. Many were worried about the safety of the land, since it was used as a power plant for so many years, but the property has already undergone extensive cleanup.

Located at the corner of Summer Street and East First Street, the power plant was built in 1898 and decommissioned in 2006. For more than 100 years, the plant originally provided coal power. Later, it produced oil power and eventually natural gas power. Since 2006, the plant and its twin smokestacks have been a neighborhood landmark along the waterfront, and it’s one of the first things to see upon entering South Boston’s eastern gateway. Exelon continued using small parts of the plant in later years for periods of high electricity demand.

The salmon-colored building and twin smokestacks will be razed to make way for the new development. However, the original brick structure built in 1903 will be restored and incorporated into the plan. Developers envision the building as the site of a future food hall, and they imagine a waterfront plaza where artisans and performers can congregate and interact with each other and locals. Indeed, the developers stated in their letter of intent that they wish to imbue the mixed-use development with a robust arts and culture scene, and it will be interesting to see how everything plays out.

By reusing the four turbine halls from the old power plant, developers can create a total of 1.68 million square feet of developable space along the waterfront. The developers plan to earmark 16% of the 636 housing units – 101 of them, that is – for affordable housing. They will also contribute $10.1 million for MBTA investments to improve transit in City Point. As part of their project, developers advocate for improved MBTA services to the neighborhood since new housing and businesses will increase demand and traffic in the area. Developers will also provide $7.3 million in linkage payments, which support affordable housing efforts across the city.

It will be some time before we see the finished project because developers plan to build the complex in phases over 10 to 15 years. However, now that BPDA approval has been granted, developers should be releasing more detailed plans soon. The long-abandoned industrial site, which has been inaccessible to the public for more than 120 years, will soon turn over a new leaf, breathing new life into the South Boston waterfront. As more properties in the area are redeveloped, Southie should compete more effectively with the Seaport, generating even more development buzz.