The Seaport's already thriving Boston Seaport mixed-use development is about to welcome thousands of more Amazon employees. In late January, the e-commerce behemoth agreed to lease 630,000 square feet of new office space at One Boston Wharf Road, more than doubling its current commitment in the neighborhood. Construction of the new building should begin later this year, and it is expected to be completed sometime in 2024. It is located in Boston Seaport, the massive 33-acre mixed-use development. Currently underway, it will ultimately offer more than 7.6 million square feet of residential, hotel, retail, office, entertainment, civil and cultural space. 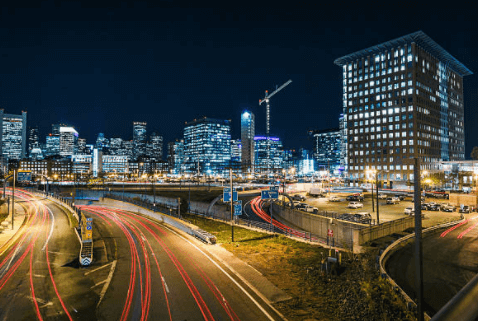 The 17-story building in question is being built through a partnership between WS Development and Canada-based PSP Investments. It will offer 707,000 square feet of office space along with ground-floor retail space. The building will be positioned in the heart of Harbor Square Park, a 1.5-acre park currently under development. Designed by Henning Larsen architects, it will also include two performing arts venues: a 500-seat theater and a 100-seat black box theater. The developers will also provide $5.5 million in affordable housing funds as part of their agreement with the city.

This will be Amazon's second full-building office lease with WS Development in the Seaport, and it should be a boon to the city's faltering office market. When COVID-19 struck early in the spring of 2020, companies around the city sent many workers off to work remotely. As the pandemic wore on, many employers adjusted to having remote workers and needing less office space. As a result, office vacancy rates have climbed significantly, and many employers are even considering downsizing permanently. By leasing more than 600,000 square feet of office space in the Seaport, Amazon could help considerably in the office market's recovery.

Employees working in the office building at One Boston Wharf Road will enjoy easy access to an array of local amenities. The building will ultimately be connected to the 1.5-acre park currently under development. Slated to open later this year, the park was designed by the same architect who created New York City's beloved High Line trail. The building will feature innovation labs, offices, mixed-use common areas and a variety of working spaces. Plans also call for a dog park on the premises.

The Boston Seaport mixed-use development is already home to more than 350 companies. It will offer 7.6 million square feet of office, retail, hotel, and other types of space when it is complete. Open space is an essential feature of the development, so expect to see lots of green expanses and connecting paths. Located at Seaport Boulevard and Boston Wharf Road, Boston Seaport is poised to become the hub of activity in the burgeoning Seaport neighborhood, which has also been attracting life science tenants and biotech firms. Of course, Amazon dominates the neighborhood already, and the new space it will lease will only cement its place in the local market.

Indeed, over the last 10 years, Amazon has invested more than $6.2 billion into Massachusetts. The company has helped create more than 20,000 new jobs across the state, with most of them concentrated in the Greater Boston area. When the new building at One Boston Wharf is complete, Amazon will have more than 1 million square feet of office space in the Seaport. The new tower will mostly house tech workers in areas like AI, machine learning and software development, so it will primarily attract white-collar workers. These new workers should help fill space at Boston Seaport when its housing units become available.